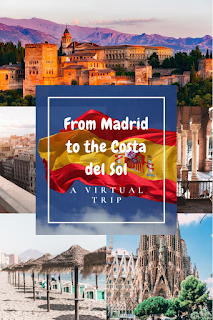 Last week for our virtual vacation we went to Madrid, Spain. I had mentioned that I did this trip my senior year of high school and we went from Madrid to the Costa del Sol. I thought for this week we could virtually take the rest of the trip. This itinerary was amazing and hands down one of my favorite trips ever.

If you are interested in doing a similar itinerary note my recommendations for length of stay in each city. To start I would recommend 4 days in Madrid before you start heading south.


Before leaving the city of Madrid we did a half-day trip to El Escorial which is located just northwest of the city. Officially known as The Royal Site of San Lorenzo El Escorial, it is more commonly known as Monasterio del Escorial, and it is the historical residence of the King of Spain. The site functions as a monastery, basilica, royal palace, pantheon, library, museum, university, school and hospital. It is also the burial place of many former kings and queens regnant. El Escorial was originally built in the 1500’s as a monument to Spain’s role as a center of the Christian world. To learn some history of the site and for a tour of the grounds click here.

Another day trip we did from Madrid before we headed south was to Segovia. This city is absolutely beautiful, and there are three major landmarks to check out during a visit. The first one cannot be missed, it is a Roman aqueduct which locals say with some modifications could still be used today. It was originally built around the 1st century A.D. to carry water 10 miles from the Frio River to the city.

The 2nd major landmark is Alcazar of Segovia, a medieval castle that dates back to the 12th century. It was first an Arab fort, then a palace, then a prison before finally becoming a military academy. Today it is a museum open to the public. Supposedly Walt Disney drew inspiration from this castle along with Neuschwanstein Castle in Germany when dreaming up the iconic Cinderella’s Castle at Walt Disney World.

The third major landmark here is the Holy Cathedral of Segovia. It is said to be one of Spain’s last Gothic cathedrals. It was started in 1525 and it took 52 years to finish. On the day of our visit the cathedral was undergoing renovations and we were unable to go inside, but you can take a look inside this beautiful cathedral, by clicking here.

After we spent another day in Madrid we started heading south and our first stop was Toledo. In 1986 the historic centre of Toledo was designated as a UNESCO World Heritage site. This historic walled city was the first capital of Spain and is surrounded on almost three sides by the Tagus River.  Christian, Jewish and Moorish designs have all had their impact on this city as it has gone through many occupations of conquerors. To learn more about the city, please click here. I would allow at least one full day to explore Toledo, many tourists visit as a day trip from Madrid.

After leaving Toledo we continued south to Sevilla. This was another absolutely beautiful city, and I would recommend spending two to three days here to explore all of the landmarks, catch a flamenco show and indulge in some tapas. The city if known for its culture, monuments and artistic heritage. It is the birthplace of Flamenco and the city where the most amazing Easter processions take place in Spain. We traveled to Sevilla shortly before Easter so we were fortunate enough to experience this first hand. The floats, called tronos, were absolutely beautiful and most parades had two floats, one with Christ and one with his mourning mother, Mary the Virgin.

While in Sevilla we toured the Royal Alcazar de Sevilla which is the oldest royal palace in use in Europe. The site regularly hosts state officials and dignitaries. It was originally devised as a fortress to protect the Muslim authorities. The origins of the palace date back to 712, it wasn’t until the 12th century however when the construction became considerably more established as a palace. The palace was also used in filming during five episodes of the HBO series Game of Thrones. My favorite part of our tour was the gardens, they were absolutely stunning.

In the evening we got to experience a traditional flamenco dance show before we headed on to Cordoba.

Cordoba is renowned for its leather manufacturing and silversmiths, and it is also home to the world’s largest olive plantations. Our stop here was short. We visited the Mosque-Cathedral of Cordoba, which dates back to around 785 A.D. when the earliest section of the Mosque was built. During the 13th century the mosque was converted to a Christian cathedral. Subsequent Christian monarchs altered and added to, but never demolished the mosque, resulting in a hybrid structure which remains today. If you travel plans include a visit to Cordoba I would recommend one full day, which would allow enough time to see all of the tourist attractions in the area.

We had one more stop before arriving at the Costa del Sol, and that was in Granada and it included a tour of the Alhambra. The city is known for its grand examples of medieval architecture going back to the Moorish occupation of the region, and especially the Alhambra. Dating back to the eighth century this ancient palace, fortress and citadel got its name for the reddish walls and towers that surround the citadel. Al-qal’a al-hamra in Arabic means red fort or castle. The Alhambra is the most important remnant of the period of Islamic rule in the Iberian Peninsula. To learn more about this amazing palace check out this video. Plan on two full days for a visit to Granada to allow enough time to explore the Alhambra, the Granada Cathedral, Albaicin and Sacromonte.

After spending the day at the Alhambra we continued on to the Costa del Sol spending our last day in Malaga at the beach. Malaga is the largest city on the Costa del Sol and is also the birthplace of Spanish artist Pablo Picasso. While at the beach we rented an oversized paddle boat with a slide. It was so much fun to slide down right into the Mediterranean Sea!

I was fortunate enough to travel back to Malaga last summer. This time we visited the town of Mijas about 30 minutes away from Malaga. Mijas is a traditional hillside village, about 430 meters above sea level overlooking the Costa del Sol. All of the buildings are whitewashed to protect the tourism and heritage value. Historically, the whitewash mixture (lime, water, chloride, and white cement) was used to keep the houses cooler in the summer and to repel insects. On our visit we explored the town, shopped and made some amazing chocolate.

I would allow three days on the Costa del Sol. Two days to explore the area and one day for the beach!


It was so much fun to reminisce about this trip! I hope you enjoyed this virtual vacation as much as I did putting it together.
Posted by Angie at 3:33 PM