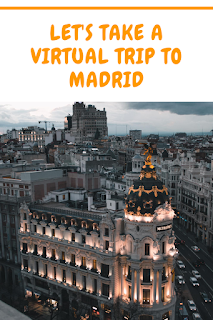 On our virtual vacation this week we are going International. I started studying Spanish in 7th grade and continued with it all through High School. My senior year I was fortunate enough to travel to Spain on a school sponsored trip. The trip started in Madrid and we toured south down to the Costa del Sol, spending time in Toledo, Seville, Cordoba before ending in Malaga. It was an amazing trip, and one of my favorite High School memories. I thought for this week’s virtual vacation we could check out Madrid.

Madrid is the capital of Spain and home to the Spanish royal family and the Spanish government. The city is one of Europe’s most historically rich cities, as it was originally founded in the ninth century A.D. and was called Mayrit at that time. Today it is considered one of Europe’s most progressive, modern and beautiful cities with a vibrant local arts culture and energetic nightlife. Let’s check out some of the highlights of the city.

The Prado Museum or Museo Nacional del Prado is the main Spanish national art museum. It is widely considered to have one of the world’s finest collections of European art dating back to the 12th century.

Take a look inside the Prado:


Plaza Mayor is the major public space in the heart of Madrid and was once the centre of Old Madrid and is located just a few blocks from another famous plaza, the Puerta del Sol. Plaza Mayor is surrounded by three-story buildings with porches all along the plaza. There are three famous landmarks within the plaza, Equestrian Statue of Philip III,

Casa de la Panaderia which was once the most important bakery in Madrid and El Arco de Cuchilleros, the most famous of the nine entrances to the Plaza. This was where my classmates and I were dropped on our first day in Madrid and told to find our way back to the hotel. Where did a bunch of American teenagers go first before finding their way back? McDonalds of course!

Puerta del Sol is one of the best known and busiest places in Madrid. Originally it was the site of one of Madrid’s gates, facing east and adorned with the image of the sun. The square also contains the famous clock whose bells mark the traditional eating of the Twelve Grapes to mark the beginning of the new year.

Gran Via, sometimes referred to as Spanish Broadway is one of Madrid’s most popular shopping areas, with a large number of hotels and movie theaters in addition to shopping. The street serves as a showcase of early 20th-century revival architecture with architectural styles ranging from Vienna Secession style, Plateresque, Neo-Mudejar, Art Demo and others. Check out this video of the area.

Buen Retiro Park or El Retiro is one of the largest parks in Madrid. It has a large lake where visitors can rent row boats. The Velaquez Palace and Crystal Palace  which are used as exhibition halls by the Reina Sofia Museum are also located here. In addition to boating, visitors also enjoy classes in rollerblading, live concerts, puppet shows, street artists and outdoor yoga. Check out this virtual walk around the park.

The Reina Sofia Museum is Spain’s national museum of 20th century art, boasting one of the finest collections of contemporary art in the world. The museum was named for Queen Sofia, who was Queen of Spain until 2014. Google Arts & Culture offers a wonderful online library of some of the museum’s collection.

One of the most traditionally Spanish things we did while in Madrid was attending a bullfight. Bullfighting dates back to Roman times and the events were originally held to celebrate special occasions such as the coronation of a new king, royal weddings and military victories. I realize that bullfighting is controversial, due to the concerns over the animal welfare, funding and religion, but if you are interested in learning more about bullfighting, check out this video (No graphic images). In Madrid, bullfighting takes place at Plaza de Toros de Las Ventas, this beautiful arena first opened in 1931 and has a seating capacity for over 23,000.

We hope you enjoyed your virtual trip to Madrid!