Most people know about the large cruise ships: Norwegian, Carnival, Royal Caribbean, Celebrity, etc. A little less known are the small ships sailing around the world. Where the largest ships hold up to 6,300 passengers, the small ships generally have less than a thousand passengers

So, what’s the difference?

Itinerary - Small ships can get places that large ships can’t navigate or islands where an influx of over 3,000 people would overwhelm the location. For instance, on our Azamara Quest itinerary we stopped in Saint Barths. A large ship isn't able to get into St. Barth's to have a stop there. 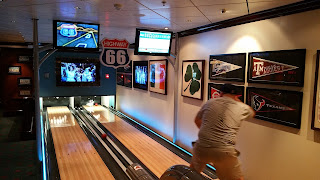 Amenities - Large ships tend to have more amenities and night time entertainment. You can find water slides, comedy clubs, ice rinks, basketball courts, Broadway shows, several type of live music, kids' and teens' clubs, and even flowriders and zip lines on the large ship. This is an important difference if you picked #2 above.
Cabin Size - This is very ship dependent. The luxury class ships like Regents or Seabourn will have larger suites available. The premium lines like Azamara or Oceania have smaller cabins. Large ships have a range depending on price point. Some large ships have 2 bedroom options.
Service - Small ships tend to have more personalized service because there's less people that the crew has to get to know. We had that experience on the Azamara Quest. On a large ship, we usually become friendly with one or two bar waiters. On the smaller ship, we knew them all. I think there's probably a joke here about me being at the bar so much. :)
Length of cruise - It's pretty rare to find anything shorter than eight nights and a lot of the itineraries are going to be 10 to 14 nights for small ships. On large ships, itineraries start at 3 nights.
Inclusions - Smaller ships tend to be more inclusive than your larger ships depending on the brand. Your fare may include excursions airfare, a pre night hotel, specialty restaurants and all your beverages. Large ships such as Norwegian and Celebrity have started offering promotions that make the cruise more inclusive.
So.. the big question is how much more does it cost to sailing a small ship?

Click here to get a chart comparing Regents Cruises to Princess and Holland America for Alaska sailings.

Email ThisBlogThis!Share to TwitterShare to FacebookShare to Pinterest
Labels: cruise, cruises, Regents, Why would I use a travel agent?