In December 2016,  we took a cruise on the Azamara Quest. This is a small ship with only five 700 guests. 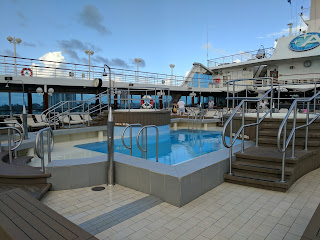 Cabin:  The cabins were small and the shower was tiny. I was grateful that our cruise was only eight nights because I couldn't have imagined going on a longer cruise with that small of a shower. To give some perspective,  the Azamara balcony cabins were about the size of a Carnival interior cabin. They did make good use of the space. We liked the patio furniture on the balcony because it allowed to have a comfortable meal outdoors. We love our room service breakfast.


Staff: We really got to know staff very well because each staff member usually has multiple roles,  especially the bar waiters. This made the service a lot more personalized. We enjoyed the special touches like chilled towels and ice water as we sat by the pool. 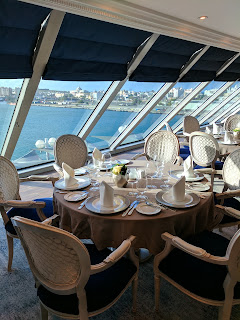 Dining - The food overall was good. It wasn’t the best cruise food we’ve ever had. Email me and I'll tell you who that honor goes to.  The menus were good and we liked the grill by the pool – especially the wings. We still the same problems with the buffet being crowded, but the service was better than we have experienced on any other ship. We had some struggle with the dining room service at dinner time. We did not have a consistent experience across the different tables where we were seated. It’s all open dining.  The means you cannot get dining time like you can on the large ships. In general, we prefer having a set time at the same table with the same staff for each dinner. We find this usually ends up with better service since the dining staff get to know us better.


Activities – We missed having a comedian onboard. The nightly shows were pretty good.  I really enjoyed the Broadway review. Trivia was taken very seriously and played in teams. We were surprised at the number of live musicians across the ship in the evening.


Itinerary -  Azamara tries to differentiate itself by having the more time in port.  In almost every port, we didn't leave until 10 or 11 o'clock at night. This made a huge difference in what we were able to do. It took so much pressure off of feeling like you had to rush back or you might miss the ship. 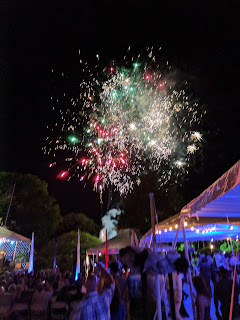 AzAmazing Evening – The other very special part of cruising Azamara is the AzAmazing evening. The team organizes a special event on land for the whole ship. Ours was a party at the governor's mansion in Antigua.  It was unbelievable. They had terrific local bands with the longest firework show I have ever seen. We had police escorts from the cruise ship to the event.  Coming back all of the staff from Azamara was outside with trays of drinks welcoming us back to the ship with the orchestra playing.


Overall Vibe -  We read more than we have any other cruising been on. We met some wonderful people. People seem to be more friendly and more open to getting to know you again because there were so much fewer of you. Overall,  we were surprised that the service didn't exceed our expectations. I think that's a sign that we have just been on a lot of fabulous large ship cruises. For those who don’t cruise as often as we do,  I think you'll have a more consistent experience on a small ship versus the varied experiences we've had on a large ships. Though, the small size of the cabin that would be a deal-breaker from many people.
Posted by Angie at 8:55 AM