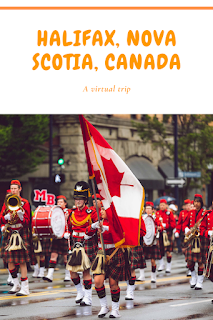 A few weeks ago we took a look at Bar Harbor, Maine for our virtual vacation. Normally this time of year is a popular time for Canada and New England cruises. In honor of that I thought we could look at another port of call that often appears on those itineraries, Halifax, Nova Scotia.

This coastal city is Nova Scotia’s capital and home to the second-largest natural harbor in the world. It became a permanent British settlement in 1749, and was named for the 2nd earl of Halifax. This city played a key role in the aftermath of the sinking of the Titanic, as it sent three ships to recover bodies and it is the final resting place for many unclaimed victims.
Angie visited Halifax on a Canada / New England cruise and shares out she spent her day:

One of the most visible landmarks in the city sits on Citadel Hill, the Halifax Citadel National Historic site, a star shaped fortress originally constructed in 1749 by Edward Cornwallis to protect the city from various enemies. Three citadels have been constructed since then, with the current one constructed around 1825. The general introduction of rifled artillery rendered the citadel obsolete shortly after the completion of the 4th structure, however it was used as barracks well into the 20th century. In 1951 is it was declared as a national historic park. Enjoy this video tour.

Established in 1867, the Halifax Public Gardens are Victorian era public gardens located near the popular shopping district of Spring Garden Road opposite Victoria Park in the heart of Halifax. The gardens are open from the beginning of May until the beginning of November and feature a bandstand that is used for free public concerts on Sundays in the summer. For a tour, click here.

The Halifax Waterfront is a wonderful place to visit in the summer. There is nearly 4km of boardwalk to walk and browse the shops and restaurants that line it. Check out this short video experience of the waterfront area.

Located on the Halifax Waterfront it the Canadian Museum of Immigration at Pier 21, is Canada’s Ellis Island. The museum occupies the former ocean liner terminal and immigration shed from 1928 to 1971. More than one million immigrants to Canada landed here during that timespan. The location also served as a departure point for more 368,000 Canadian military personnel during the Second World War. Check out this video to learn more about the museum and the history of immigration in Canada.

The oldest and largest maritime museum in Canada is The Maritime Museum of The Atlantic. The museum’s collection contains more than 30,000 artifacts, including 70 small craft and a steamship: the CSS Acadia, a 180-foot steam-powered hydrographic survey ship launched in 1913. Here you can also learn about the Titanic its creation, demise and the effect the sinking had on the city. Check out this tour of the museum.

Fairview Lawn Cemetery is the final resting place of more than 100 victims of the sinking of the Titanic. To learn more about the history of the aftermath of the sinking of the Titanic, click her
e.
The Nova Scotia Museum of Natural History located in the downtown area offers visitors an opportunity to see the collections and exhibitions of artifacts with cultural significance to Nova Scotia. A favorite attraction of visitors to the museum is to see Gus a 98 year old Gopher Tortoise who has lived at the museum since 1942. For a short tour of the museum click here.

If you are visiting with the kids a great place to check out is Discovery Centre, an interactive, hands-on science and technology museum. Check out this brief tour to see what the centre has to offer.

If you are looking for a nice afternoon stroll check out Fisherman’s Cove Heritage Center. The old fashioned boardwalk has gift shops and restaurants theming with the fishing culture and pirate fashion. The sandy beach and wetland offers kids a natural playground.

For a great overview of the city from a local’s perspective check out this video.
Posted by Angie at 12:40 PM