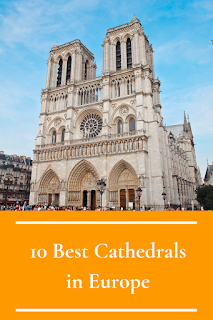 For this week's virtual trip I thought we would do something a little different and take a look at the top 10 best cathedrals in Europe. This list come to us from USA Today and National Geographic. These are the European cathedrals that best represent the history, architectural wonders and the imagination of the country in which they are located.

The first cathedral we are going to look at is Cantebury Cathedral in Canterbury Kent, England. Its formal title is the Cathedral and Metropolitical Church of Christ Cantebury. This is the oldest and most famous Christian structure located in England. Originally founded in 597, the cathedral was rebuilt between 1070 and 1077. The Gothic-style architecture with its arches and dramatic windows, is extremely popular with tourists. Check out this interactive tour of the cathedral here.
On the list also located in England, is St. Paul’s Cathedral in London, an iconic feature of the London skyline. The church serves as the mother church of the Diocese of London. It has been used in many films and television programs, including two Harry Potter films. Enjoy this 360 degree informational tour of the cathedral:

Leaving England we are next headed to France, the country where the majority of the cathedrals we are going to look at are located. Three hours outside of Calais is Notre Dame de Reims, a true Gothic Cathedral.

The facade of the cathedral is unique in that it holds the city’s emblem, the status known as “L’Ange au Sourire”. This cathedral is also famous for being the traditional location for the coronation of the kings of France.
Rouen Cathedral, considered the epitome of grand and ornate in Gothic architecture, was for four years between 1876 and 1880, also the tallest build in the world. The interior of the cathedral inspired painter Claude Monet so much that he painted more than 30 views of it.  Take a look:

The most famous cathedral in France, Notre Dame Cathedral, is located in Paris. The gothic framework was built from the 12th through14th centuries, surrounded by the Seine, it is in the center of the Ile de la Cite, dividing Paris’s Right and Left Banks. In 2019 a massive inferno engulfed the cathedral causing the building’s spire and roof to collapse. Restoration is underway with a goal of completion in 2024. To learn more about the cathedral and restoration efforts click here and here.
Cathedral Notre Dame de Chartres is located 80 km southwest of Paris. A Roman Catholic Church, the current structure was the sixth one built between the 12th and 13th centuries. The Romanesque and Gothic style of the cathedral are unique to Chartres and reflect the cross-century development of the church. Check out this link to learn more.
Making the list is a cathedral we virtually visited a few weeks ago in Barcelona, Spain, La Sagrada Familia. Construction of this church began in 1882 and is not slated to be completed until 2026. It is the tallest religious structure in Europe at over 550 feet tall. The architect, Antoni Gaudí knew the structure would not be completed in his lifetime. He died in 1926 and is buried in a tomb in the underground level of the church.
Heading to Florence, Italy and the Santa Maria del Fiore, also known as the Florence Cathedral. This cathedral holds much of the world’s greatest art. It was built between 1296 and 1380, originally designed by Arnolfo di Cambio it was taken over by Franesci Talenti who increased the grandeur of the cathedral after Cambio’s death. The cupola of the cathedral can be seen from miles away.

Next we are headed over to Istanbul, Turkey and Hagia Sophia. Built in the sixth century it contains Byzantine artwork, sculptures and mosaics. It was once the largest cathedral in Christendom for hundreds of years before it was converted to a mosque where the Muslim population worshiped for centuries. On July 10, 2020, it was converted from a public museum back to a Mosque.

The last cathedral we are going to look at is St. Sophia in Novgorod, Russia, about 200 km southwest of St. Petersburg. Built around 1050, It is one of the oldest stone buildings in Russia with 5 domes and an adjacent white stone Bell Tower. The gates on the western wall are intricately decorated. Inside the cathedral features many icons and frescoes.