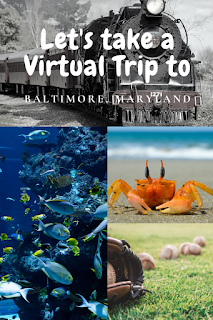 Who knew there was so much to do in Baltimore?

I spent part of my youth growing up in Central Pennsylvania and my family would often take day trips to Baltimore and visit the Aquarium at the Inner Harbor or take in a baseball game at Camden Yards. When I started looking at Baltimore for our virtual vacation this week I couldn’t believe how much there is to see and do. Hey Mom and Dad, we missed…..A LOT!

Let’s take a look at some of what the city has to offer.

Located less than an hour from Washington, D.C., Baltimore is the largest city in Maryland. The city, located on the Chesapeake Bay, is home to more than 1.5 million people. The city’s Inner Harbor was once the second leading port of entry for immigrants to the United States. Today the Inner Harbor area is a tourist attraction full of museums, restaurants and shops. So let’s start with some of the attractions around the Inner Harbor.

The National Aquarium, is one of the largest public aquariums in the United States, it is home to more than 10,000 marine and freshwater animals. The Aquarium is currently open to visitors, but you can also view several livestreams from the Aquarium online including the Blacktop Reef, Jellies Invasion, and Pacific Coral Reef. To learn more about the Aquarium from home check out their YouTube Channel.

The only surviving ship from the Civil War is docked the Inner Harbor and available for tours. The U.S.S. Constellation was built in 1855 for the U.S. Navy, and decommissioned in 1864 when most of her crews' enlistments had expired. The ship was then turned into a training ship for many years, before eventually being restored in the 1930’s and relocated to Baltimore in 1955. The ship has been designated as a National Historical Landmark.

Check out a video tour:


The Maryland Science Center offers three floors of science-focused exhibit that will interest both children and adults. There are hands-on exhibits that explore the solar system, human body and much more. The Center is currently open from Thursday-Sunday, and their website is offering Science Online a variety of science related activities that you can do from home. Also check out their YouTube channel for more information about the Center and additional activities that you can do from home.

The Reginald F. Lewis Museum of Maryland African American History and Culture is the best resource for information and inspiration about the lives of African Americans in Maryland in the areas of industry, politics, leisure activities, sports, media, the arts, education, the military and more. The museum is currently closed but you can view over 6,000 objects in the collection via their online portal.

Port Discovery Children’s Museum offers over 80,000 square feet on three floors of interactive exhibits geared towards children. The museum is ranked in the top five of children’s museum in the U.S. The museum is temporarily closed right now but they are offering an online series called At Home Play & Learning. The link offers activity ideas, tips and virtual programs. To learn more about the museum and additional activities that you can do from home, check out their YouTube channel.

Moving on just a short walk from the Inner Harbor is Camden Yards, where the Baltimore Orioles play. If you visit the area in the summer check the schedule to see if you might be able to catch a game. Tours are also available of the stadium from April through October, but you will want to check the website first for more information as the tour schedule varies depending on the game schedule. This summer due to COVID-19 tours are unavailable, but you can check out this virtual tour.


Babe Ruth, one of the most famous baseball players of all time, was born in Baltimore and his birthplace has been turned into a museum. The home is just two blocks from Camden Yards, and features rare artifacts, photos, videos and more. This is a must-see for any baseball fan! Here's a virtual tour of the museum:


Opened in 1953, the Baltimore & Ohio Transportation Museum has one of the most significant collections of railroad treasures from around the world and has the largest collection of 19th-century locomotives in the U.S. The museum is located in the Baltimore & Ohio Railroad’s old Mount Clare Station and adjacent roundhouse. The museum is currently open and they also have virtual exhibits available. The museum has a YouTube Channel including story time videos for children and information about the museum events and the museum itself.

Located in the Locust Point neighborhood of Baltimore is Ft. McHenry a coastal pentagonal bastion fort. The fort is best known for its role in the War of 1812, when it successfully defended Baltimore Harbor from an attack by the British. The morning after the battle an American flag was raised signaling victory, Francis Scott Key saw this from a ship in the harbor and was inspired to write the poem, “Defense of Fort M’Henry. This was later set to tune and became known as “The Star Spangled Banner”. Check out this video tour of the fort.


There is so much to see and do in Baltimore and I only covered some of the highlights. For more information, click here.