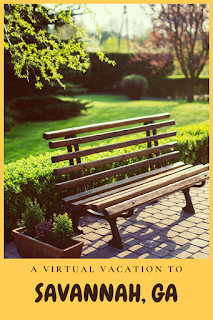 One of my favorite vacations growing up was our trips to Hilton Head Island. Our family spent several summers and some winter holidays vacationing on the island, and our visits often included a day trip to Savannah, GA, which is only about 45 minutes away. I miss those trips, especially now with all that is going on in the world. So I thought this week we could take a look back one of my favorite cities to visit growing up, Savannah, GA.

Savannah was the first named city in Georgia back in 1733, today it is Georgia’s 5th largest city. It was known as a strategic port city during the American Revolution and the American Civil War. It is also known for it’s beautiful coastline, well preserved architecture and rich history.

The largest National Historic Landmark District in the United States is located in Savannah. It contains more than twenty city squares filled with museums, churches, mansions, monuments and famous forts of the Revolutionary & Civil War eras. Let’s take a closer look at a few of these famous homes located in the area.

One of Savannah’s most famous residents was Juliette Gordon Low, founder of the Girl Scouts. Her birthplace is available for tours. Currently closed during the pandemic the website has lots of information on Ms. Low, the house, and Girl Scouts. Visitors to Savannah can also visit the Andrew Low House which was owned by Juliette’s father-in-law.

The Mercer Williams House Museum is the scene of the 1981 shooting death of Danny Hansford by the home owner Jim Williams, the story of which is retold in the 1994 book Midnight in the Garden of Good and Evil, which was later turned into a movie. The home is open for tours with limited occupancy.

The most haunted home in the historic district is said to be the Sorrel-Weed House located on Madison Square, it is also where the opening scene for the 1994 film, Forrest Gump was shot. Tours are currently available of the home, to learn who haunts this home, click here.

One of the most photographed spots in all of Savannah is Forsyth Park also located in the historic district. The park is popular with both local and tourists. There are 30 plus acres of trees, flowers and other foliage to enjoy. The park also plays host to open air concerts, and a farmer’s market every other Saturday.

The oldest Black Church in North America is also located in Savannah, the First Baptist African Church was founded in 1773, although not officially congregated until 1788. Tours of the church are currently unavailable due to COVID-19, but you can learn about the church and its history:

The Savannah Children’s Museum offers outdoor activities such as arts & crafts, story time and water play and is a great spot for children for ages 18 months to 8 years. Another great spot for the kids is the Georgia State Railroad Museum  The museum has a fully operational turntable, historic railcars to explore, guided tours and train rides. For a virtual tour of the museum click here.

The Ships of the Sea Museum is a wonderful exhibition of ship models, paintings, and maritime antiques from the 18th and 19th centuries during the era of Atlantic trade. The museum is currently open and they also offer some online exhibits that can be enjoyed from home.

I mentioned that our family would vacation on Hilton Head Island which is known for having some of the top beaches in the U.S. as well as world-class golf courses. At just over 69 square miles the island offers so much to see and do. Here's a peek at some of that the island has to offer:

Another popular island near Savannah is Tybee Island which is just 18 miles from downtown. Popular since the 1800’s, the island is smaller than Hilton Head and offers 3 miles of wide, clean sandy beaches, perfect for sunbathing, swimming, kayaking, fishing and other water sports.

Located near Tybee Island is Fort Pulaski. In April 1862, during the American Civil War the Union Army, after a near 112 day siege forced the Confederacy to surrender Fort Pulaski during a two day battle.

The battle is considered a landmark experiment in the history of military science and invention due to the innovative use of rifled guns, which made existing coastal defenses obsolete. The fort is currently closed due to the pandemic, but to learn the history of this fort and the 2-day battle that transpired between the Confederacy and the Union army, please take a look at this video:

We hope you enjoyed your virtual trip to the Savannah area.