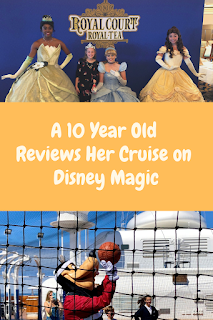 Last summer I got to go on my first ever cruise! I spent 3 weeks on the Disney Magic, first cruising two weeks across the ocean to Spain and then I spent an additional week cruising to Italy and France. I wanted to share a little bit about my experience on the ship. 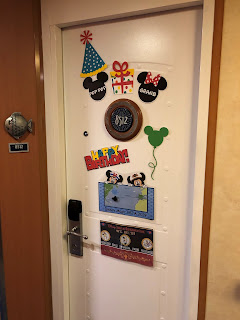 Our cabin was a Deluxe Oceanview Stateroom with Verandah on Deck 8. There was a bunk bed, couch bed, a bed that pulled out from the wall, and an adult bed. There is a curtain dividing the adult bed from the kid beds. The kids side had a tv. On the adult bed you will find a little figure of an animal or something made with a bath towel and some chocolate after dinner. This was left by our cabin steward who cleaned our room for us. We had a balcony were you could look out and see a lot of pretty things. We had two bathrooms one had a shower and a sink and the other had a toilet and a sink.

The cabin doors are magnetic and many people decorate their doors with fun magnets. My grandparents both had birthdays when we cruised and we decorated their door.

Fish Extender
The Fish Extender was one of my favorite things to do. Guests organized groups of 10 on their own, outside of Disney cruise line, and would leave little gifts during the cruise for the other cabins in their group. Almost every time I walked in my cabin I would check my pouch to see if anything was in it. We also had to deliver a lot to other cabins not just on our floor but almost all of the floors.

Kids Club
In the kids club there are many things to do. I spent a lot of my time in the Oceaneer Club and Lab which is for kids ages 3-12. My favorite was to play Ga-Ga Ball. You could also play four square. They had craft areas as well as drawing areas. They had a Toy Story area, movie area, Avengers area, and animation areas.  Sometimes the characters would come visit. My brother spent his time in Edge, which is the club for kids ages 11-14.

Animators Palate
Animators Palate was my favorite. On some nights they would have pictures on screens and you would have to see who could name the most Disney Characters. On that same night the waiters started out wearing all black and white uniforms and at the end of dinner Mickey came out and the waiters uniforms changed to a rainbow of colors. On one other night you would get to draw your own animation and they would animate it on a screen for you at the end of dinner. 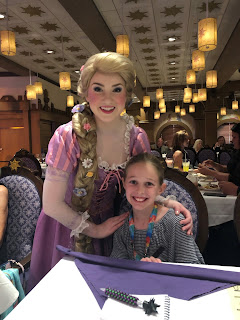 On the first night you go to the restaurant they start a show about Rapunzel’s Birthday. On the last night they finish the show and kids get to make lanterns out of paper, and they have a special desert menu. You can meet a lot of characters and a lot of them are very funny.

Lumiere’s
This restaurant is simple. It has a stage that is themed Beauty and the Beast. They lights are the little rose pedal things. This is the one dining room that you can have a sit-down lunch served to you in.

Other Food Places
There are some other food places on the ship you can eat at, Cabana’s which is the ship buffet, Duck in Diner, Pinocchio’s Pizzeria and Eye Scream Treats. Plus the adults get to eat at Palo.

Main Theater
The theater is a great place on the Disney Magic. You can go see all sorts of shows there at night. My favorite is the Tangled: The Musical. They are all at different times. There are usually 2 shows for the different dinner times. The second one is a little later. It is sometime after 8:30 every night.

Movie Theater
I never went to the movie theater, but my mom and Grandpa did. They saw the live action Aladdin movie when it first came out. That is a really cool thing about the Disney Cruise ships, you get to see the movies at the same time they are released in the theaters.

Pools/Slides
The pools and slides are really fun. The Goofy pool is right in front of a big outdoor movie screen where you can see some of your favorite Disney movies. My favorite slide is the aqua-duck. It is really thrilling. The other slide is not so big, but it is super twisted. On of the other pool areas has a bunch to do. Then there is a toddler play area. 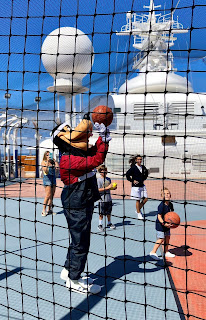 The Wide World of Sports deck is a fun area to hang out on. There is a great view, and many fun things to do. You can play basketball, ping-pong, and foosball. I liked the Basketball and ping-pong most of all.

Animation Classes
Animation Classes for me were always so fun. You could get instructions on how to draw many different Disney characters, from the classics, to the newer ones. I even got to draw my favorite Disney character. Some might be a captain Minnie or Mickey but it was always so fun no matter what we were drawing. I recommend bringing an eraser to help you. But they will provide paper and pencils. 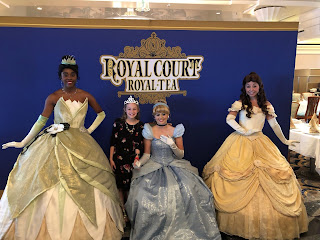 The Royal Court Royal Tea is an event that you can do at Lumiere’s. You can have tea and sweet treats, while you visit with Belle, Cinderella and Tiana. You also get a Cinderella doll, a jewelry box, and a nice framed photo of yourself with the princesses.

Characters
The Characters are all around in many different places. You might wait in line to see one or you might meet one walking around the ship. The more the popular the character is the longer the line. Some of the popular characters are Captain Jack Sparrow, Captain Marvel, and the other Avengers characters. 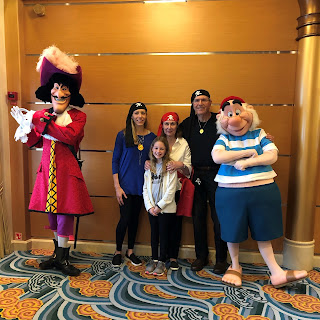 Pirate night is a really fun night for everyone, many people dress up in pirate costumes.  If you are in Edge you can perform. You can see the characters dressed in their pirate costumes, there is a special menu in the dining rooms, mickey will zip-line across the ship, and you can see fireworks. Disney is the only cruise line allowed to shoot off fireworks from their ships.