This week, Katy is our tour guide through Washington DC. A reminder that links to the products are affiliate links. This means Trips with Angie earns a small commission if you purchase using that link.

One summer, when I was a kid, my parents took us to Washington, D.C. to visit the White House, U.S. Mint, and some of the many monuments and museums. It’s a trip I would like to do with my kids someday so I thought this week we could take a trip there, virtually.


Have you ever flown into Ronald Reagan Washington National Airport? It’s one of the coolest airport landings I have done, flying in between the monuments, the White House, the Capitol building and the Pentagon as you make your descent into the airport. What you see can depend on the side of the plane you are sitting on. Check out this video from a plane of approach and landing.


Now that we have arrived, let’s start with the official residence and workplace of the President of the United States, the White House.

Google Arts & Culture offers a great 360 degree photo tour, including insight into the many works of art found throughout the residence.

Let’s now head about 2.5 miles to the U.S. Capitol building, home to the House of Representatives and the Senate for over two centuries. It is one of the most architecturally impressive buildings in the Nation. This website offers an amazing virtual tour. And you can build your own replica of the Capitol with this 3D Building Set.

At the far opposite end, just beyond the National Mall from the Capitol building, is The Lincoln Memorial. 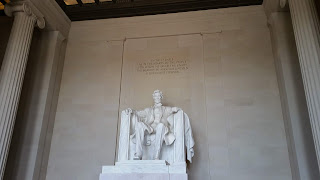 Built between 1914 and 1922 to honor our 16th President, Abraham Lincoln. The Lincoln Memorial includes 36 columns of Colorado marble, one for each state in the Union at the time of Lincoln's death in 1865. You will also find inscribed on the south wall of the monument is Lincoln’s Gettysburg Address, and on the north wall is his Second Inaugural Address. This online tour, also offers VR capabilities to walk through the memorial.


Under sponsorship by President Franklin D. Roosevelt, The Jefferson Memorial is our next stop. It was built between 1939 and 1943 as a tribute to Thomas Jefferson, as a Founding Father of the United States and founder to the Democratic- Republican Party. You can build your own Jefferson Memorial with the 3D Building set.


Next let’s head towards the Smithsonian Museums. There are 17 Smithsonian Museums, and we are going to check out two of them. First is the The Smithsonian's National Museum of Natural History, the virtual tour allows you to not only explore the permanent exhibits, but there are also 15 current exhibits that you can check out plus several past exhibits. Opened in 1910, the museum which sits on the National Mall was one of the first Smithsonian buildings constructed exclusively to hold the national collections and research facilities. The museum's collections, the largest in the world, contain over 145 million specimens of plant, animals, fossils, minerals, rocks, meteorites, human remains and human cultural artifacts.

The second Smithsonian museum we are going to check out is the National Air and Space Museum. Did you know that it is the most visited Museum in the United States? The museum maintains the largest collection of historic air & space objects in the world. Through this virtual tour you have the ability to walk though the museum and if you have virtual reality (VR) capabilities, view the museum through your device and you will feel like you're really there! The Smithsonian offers craft kits to bring the learning home. Check out this Space themed craft kit:

Our second to last stop is The Washington National Cathedral which was made the non-denominational National House of Prayer by Congress in 1907. It has held the state funerals for four American presidents, as well as the memorial services for 5 other U.S. Presidents. Presidential prayer services were also held here the day after inaugurations for six of our U.S. Presidents. The Cathedral website is offering online worship, and opportunities to learn about the Cathedral virtually during its temporary closing. Did you know you can also find Darth Vader at the Cathedral?


If you enjoyed your trip to our Nation’s Capitol you can bring it with you to your next Zoom meeting with one of these beautiful backgrounds. My favorite is the one with the Jefferson Memorial and the Cherry Blossom trees. Which one do you like?

Working with Trips by Angie is super easy. There is a $99 deposit to start the trip planning process.

This deposit delivers vacation options based on what’s important to you. Because of my travel experience, I’m able to
create the best experience for you (ie. a resort that lives up to your expectations) – and help you steer away from those experiences that look fabulous online and aren’t so hot in real life (hey – it happens).

I ask a series of questions so I can get a feel for what you are looking for in your experience, and then get to work to prepare options for you. From those options, you can provide feedback until we finalize that perfect itinerary within your price range.

Once you’re happy with the itinerary, you’ll pay a 2nd deposit and your trip will be officially booked. The $99 deposit will be applied to your final payment towards your vacation.

To get started, email Angie@TripswithAngie.com