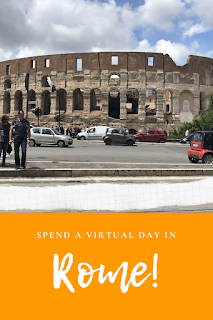 This week’s virtual vacation is a day in Rome! One of the many highlights of my Transatlantic/ European cruise vacation last summer was a day spent in Rome. I am going to take you through our day virtually with a few additional stops. We toured the Vatican, the Roman Colosseum, and the Roman Forum on that day. There were three other places we didn’t have time to visit that we really wanted to see, the Pantheon, Spanish Steps and the Trevi Fountain. 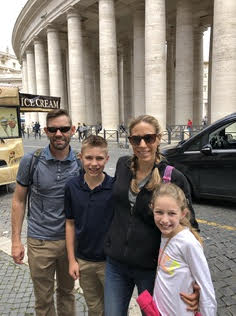 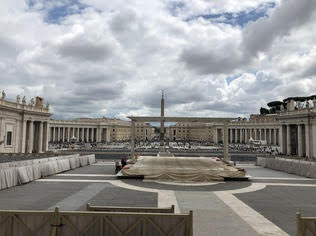 We spent several hours at The Vatican, after leaving the Vatican we dined in a little restaurant on pasta and wine. The food was so good! There is just something about eating pasta in Italy! 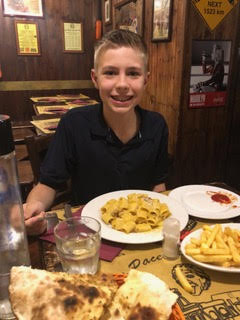 Speaking of eating pasta in Italy, just outside of Rome there is a woman who hosts pasta-making classes, and visitors can learn to make pasta from scratch with a real Italian grandma. This class is the top-rated experience offered via AirBnB Experiences. Since quarantine this grandma has taken her classes online. Anyone can livestream the class, Nonna Live at a cost of $60. Classes book up quickly, and Nonna herself is only available on weekends. One of her granddaughters handles the weekday classes. 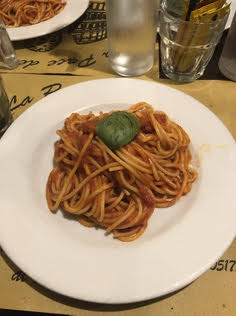 If you end up loving making homemade pasta, here's some tools to level up your pasta game: (These are affiliate links)


After lunch we walked off some of our amazing meal on the way to the Colosseum. Originally the concept of Emperor Vespasian in 75 A.D. and completed by Titus in 80 A.D., the Flavian Amphitheatre, as it was originally known, is still a modern marvel. It became a symbol of power and majesty of the emperor, Rome and Roman society. The unique architecture of the Colosseum included numbered seating, a sunshade, and an underground system of tunnels and cages. 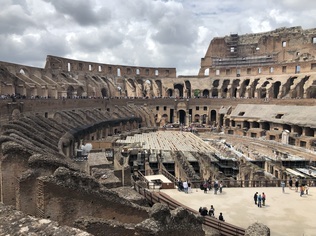 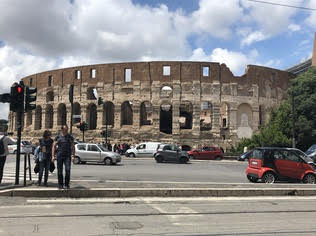 After the Colosseum we walked over to the nearby Roman Forum. The site is located at the center of the ancient city of Rome and was the location of important religious, political and social activities. We spent quite a bit of time here. I found it really interesting to learn about society in the days of Ancient Rome. Here is a great YouTube tour of the Forum. 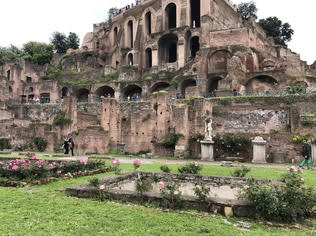 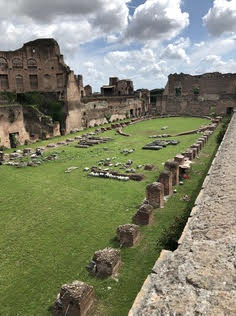 When you take a Mediterranean cruise and Rome is on the itinerary, the cruise terminal that the ship's dock at is in Civitavecchia, about an hour to an hour and half away from Rome depending on traffic. If you only have one day in port, unfortunately you can’t see it all. 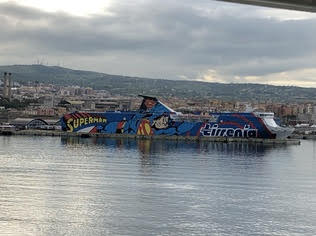 
Here are a few more places we wish we could have toured in person that day.
The Pantheon is traditionally thought to have been designed as a temple for Roman gods. The original was destroyed by fire around 80 A.D. and was rebuilt twice, after a fire destroyed the second structure in 110 A.D. The current structure was completed around 126-128 A.D. and is one of the best preserved monuments in Rome. Click here for a live webcam or check out this video tour:

Construction of the Trevi fountain started in 1732 and was completed in 1762. The fountain, one of the most famous in the world, is built mostly of Travertine stone. According to legend, tossing one coin into the Trevi Fountain means you'll return to The Eternal City (Rome), tossing two coins means you'll return and fall in love, and tossing three coins means you'll return, find love, and marry. Coins are meant to be thrown using the right hand over the left shoulder. An estimated 3,000 euros are thrown in the fountain each day. The money is collected and donated to charity. Click here for a live webcam view of the fountain.

The Spanish Steps were built in order to link the Trinità dei Monti church that was under the patronage of the king of France, with the Spanish square below. A live webcam view of The Spanish Steps shows its unique design and elegance which made it a popular gathering place for people of all walks of life during the 17th century. Today it’s a popular tourist attraction, but never mind the long tradition of lounging on the steps, sitting on the Spanish Steps today is now subject to a 400 euro fine.
Even though I didn’t make it to the Trevi Fountain that day to toss in a coin, I really hope I get to go back to Rome. In just one visit, it became one of my favorite cities in the world.

If you are just as enthralled with Italy, here's some great books, games, and puzzles:

Colosseum Board Game - For 3 to 5 players, ages 14+. In the game each player is a Roman impresario - producing great spectacles in his or her arena in the hopes of attracting the most spectators. Players earn wealth and glory for each event run, using it to create ever more ambitious events

Have you been to Rome? What were your favorites?
Posted by Angie at 6:00 AM