Amy took a road trip from Michigan to Salem, Massachusetts with her teenage daughter. She shares her experience:

First stop on our New England Tour was Seneca Falls, NY, home of the women’s rights movement and the inspiration for the town in the Christmas movie classic, It’s a Wonderful Life. The Hall of Fame museum is in the process of moving into the old Seneca Falls Knitting factory where they plan to expand on their exhibits and make it more interactive. Currently, it is mostly half-poster sized placards with a photo of the woman being honored and a biography of who she is/was and what accomplishments earned her the induction into the Hall of Fame. There were a few display cabinets with various items, newspaper clippings or photos. There were some cut outs of the women that were done to their actual size/height. There was a short walking trail along the river with a few busts and statues; I’m not sure if this was under construction or in a completed stage – there weren’t very many and it was not clear how long the trail was supposed to be or how far we should walk. 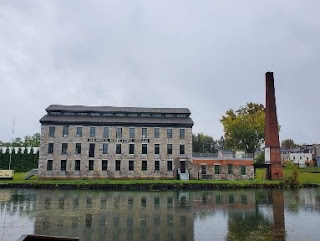 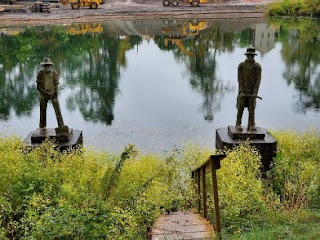 We arrived late afternoon in Salem and found our hotel in nearby Beverly, MA. The Beverly Garden Suites was neat and clean. Staff were friendly and the location to downtown Salem was fairly convenient. The first night we took a walking tour and lucked out in getting a guide who also has a Masters in History.

This 2 hour walking tour gave us a great overview of the area and the guide’s additional training provided a very rich experience of what was happening in 1692. From the French and Indian war, raids from Native Americans and 3 summers of drought, the town of Salem was under a constant state of stress. How the accusations of witchcraft began is still uncertain, however, the theory presented included all of this information to help put it into perspective along with the Puritan religion, which was very strict. The girls who began the accusations were the daughters and niece of a local minister (who had no formal training as a minister). The story goes that the girls were talking with a slave by the name of Tituba who was teaching the girls fortune telling (which was strictly prohibited and could lead to severe physical discipline if it were discovered that the girls were partaking in this).  Marriage was often arranged when a girl turned 14 so the girls aged 9, 12 and 15 were quite concerned about who their future husbands would be. By dropping eggs into a cup of water, they were supposed to discern the face, first initial of a name or image of their future husband’s occupation; The youngest girl saw the image of a coffin and took this to mean her death. Frightened by this and by the fact they were engaging in activity that could lead to severe discipline, the other girls likely persuaded the youngest not to say anything- and she became mute. In short, an explanation of some sort was needed and local doctors could not find anything wrong, so rather than acknowledge they were ignorant of the actual cause of illness, someone must have put a spell on the child.

At this time, once an accusation of any sort is made, it is the responsibility of the accused to prove they are innocent—not for the accuser to present any evidence or fact of a crime. And once accused, local law enforcement could remove any of your possessions; but not your land. They could only take your land once you were convicted. Strangely, the first woman accused happened to be widow with quite a lot of land. In total, 19 residents of Salem and Danvers died as a direct result of the witch trials. Over 150 more were accused and placed in jail—and charged for the cost of their cell and chains (iron chains because the spirit or spectre of a witch could not escape to cause harm as easily) which put many of these individuals into debt quickly. If they could not pay, they did not receive larger cells, food or water. And once declared innocent, they often stayed in debtor's jail until they had paid off their fines. Many others starved or died as a result of the conditions inside theses cells. 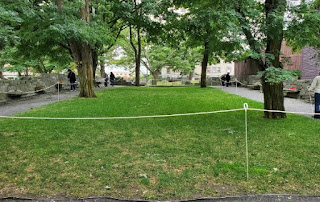 The memorial created for the 19 who died as a direct result of the trials; each bench is dedicated to one of the victims and the back fence intentionally dips down to allow the victims to face their accusers who are likely buried in the cemetery just beyond. 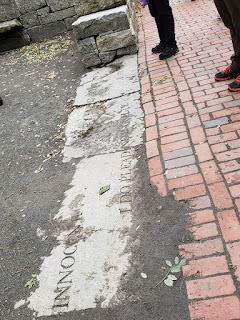 Notice the flat stones at the entrance that include quotes from the victims, proclaiming their innocence. The stones are easily stepped over and ignored; the surrounding stone wall is meant to represent the legal system of the time and you can see how it covers up and even cuts off the flat stones.
The House of Seven Gables is a bit of a walk from downtown Salem; there is a trolley tour that goes around the whole area and then you can stay on the trolley to return to areas you want to visit more in depth and use your ticket to get on and off as desired for the day.
Built in 1668 by John Turner and passed along to his son and grandson, this home faces Salem Bay. Susanna Ingersoll inherited it from her father, Captain Samuel Ingersoll who purchased it in 1782 and made renovations to the home, removing the gables to make it more like the boxy Federal style.
Susanna recalled the way the home looked to her, nephew, Nathaniel Hawthorne (the great-great-grandson of the Hanging Judge Hathorne) and suggested that perhaps it could be the setting for some of his writing. So the house as we see it today is based on a book that was a based on a house. Caroline Emmerton purchased the “Old Turner Mansion” in 1908 and worked to restore it to its perceived original look, including elements from the book such as the cent shop attached to the kitchen, hoping to draw more tourists coming to see the home after the success of Hawthorne’s book. 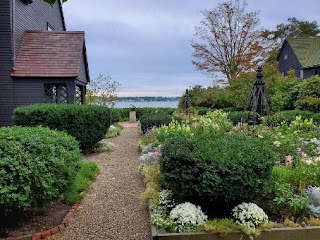 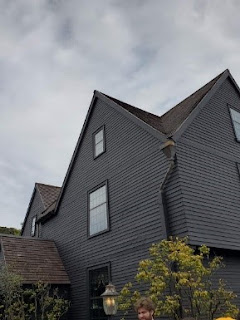 
The only other structure still standing from the time of the witch trials belonged to one of the judges and is called the Witch House. I would definitely recommend walking past this and viewing it from the outside. After being inside the House of 7 Gables, there was not much difference in architecture and the Witch House is a self-guided tour. We did not get as much out of this experience as others.


The Witch Dungeon is one we would recommend; it is not the actual site of the jails as most of the buildings associated were razed, likely related to guilt or shame as having been associated with something so outrageous and awful. The only reason the Witch House survived this fate was because they thought it belonged to someone else.


The Dungeon includes a live re-enactment of part of a trial. This is a great activity for later in the day when needing a break from walking as you will be seated and there is air conditioning. You get a light overview of history and a glimpse of what the trials were like. The accused stood no chance when things like spectral evidence were being used. Following the reenactment, you move downstairs to replicas of the jail cells. To describe the cells as poor conditions would be an understatement; they backed up to the river in their original location and often flooded. A cell the size of our front hall coat closet would house 6 or 7 adults. The prisoners were billed for their cell, food, water and the iron chains. This quickly created a financial strain on their families and often led to bankruptcy. Also, once accused (not convicted)  the local sheriff could then take the accused's possessions, further leading to financial ruin.