When's the best time to book a vacation? 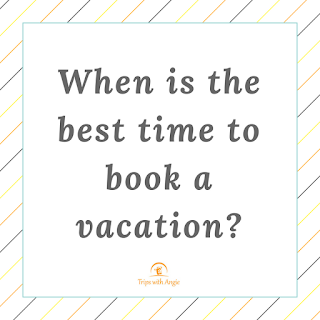 Cruises: The Earlier the Better
It's to your advantage to book a cruise when the schedule comes out. It's a win/win because you can book a refundable deposit and adjust your booking for any new promotions that are released between when you book and your final payment date.

All Inclusive Vacations: 6 - 8 months in advance
Airfare schedules are released 330 days in advance. Southwest and JetBlue usually release their schedules a little later. This means it's hard to get accurate pricing for your total vacation cost before then.


Last Minute Deals: Be Flexible
Your best chance at a last minute all inclusive deal is to be super flexible. One challenge with last minute deals is the flights.
For cruises, it helps if you can drive to the port to avoid the last minute airline prices. A good time to check is one month before departure.

When vacations are you dreaming about over the next year? Let's get started!
Posted by Angie at 8:37 AM

Email ThisBlogThis!Share to TwitterShare to FacebookShare to Pinterest
Labels: travel tips, Why would I use a travel agent?