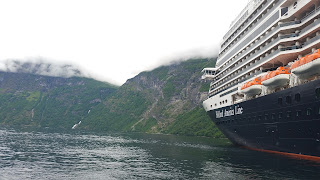 To understand the Koningsdam, you need to understand a little bit of the HAL history.   HAL has always been a cruise line that attracted an older clientele and as such their ships were oriented around this group. Their ships kept up the style of the ocean liners from the 1940’s and 1950’s.  When cruising became more mainstream in the 1970’s and 1980’s, HAL kept building ships in the same way.  And they were successful at doing it, building a fleet of 10+ ships that were very popular.   HAL was the very first mainstream cruise line to go to Alaska and that continues to be one of their most popular destinations as they have up to five ships sailing in that area seasonally.

HAL realized that to continue to be relevant in the cruise industry they would need to be able to offer something different and the they needed to attract a demographic.   The Koningsdam was a ship that would be the first ship in what HAL defined as the Pinnacle class.  The ship has a modern look, lots of glass and steel. Nothing illustrates this better than the three-deck steel sculpture that fills the atrium and is one of the first things you will see upon embarkation.  It is pretty spectacular to see, especially at night time as the lighting glistens off the shiny steel.     The ship also has the largest passenger capacity of any ship HAL has ever built.


I sailed on this ship during it’s inaugural season in Europe in July of 2016.  The ship had newly launched in April of this same year so everything was brand new.   The highlight of this ship is the specialty dining.  If you are an adventurous diner, then there are so many places to try out.  While the ship had a few low points (I’ll get to those later), specialty dining is not one of them.  I had meals that were some of the best meals I have ever had - on land or sea.  Some of the highlights are below.

De Librije - This was a pop-up restaurant experience that had a supplemental charge per person.  The Pinnacle Grill, which is a staple restaurants on all HAL ships, turned into a special tasting menu restaurant.  De Librije is a 3-star Michelin restaurant in Zwolle Netherlands and that ties in nicely with HAL’s heritage.  This was in the top three meals I have had in my life.    The Sweetbreads and Pork Belly were my favorite entrees.    Wonderful wine pairings. 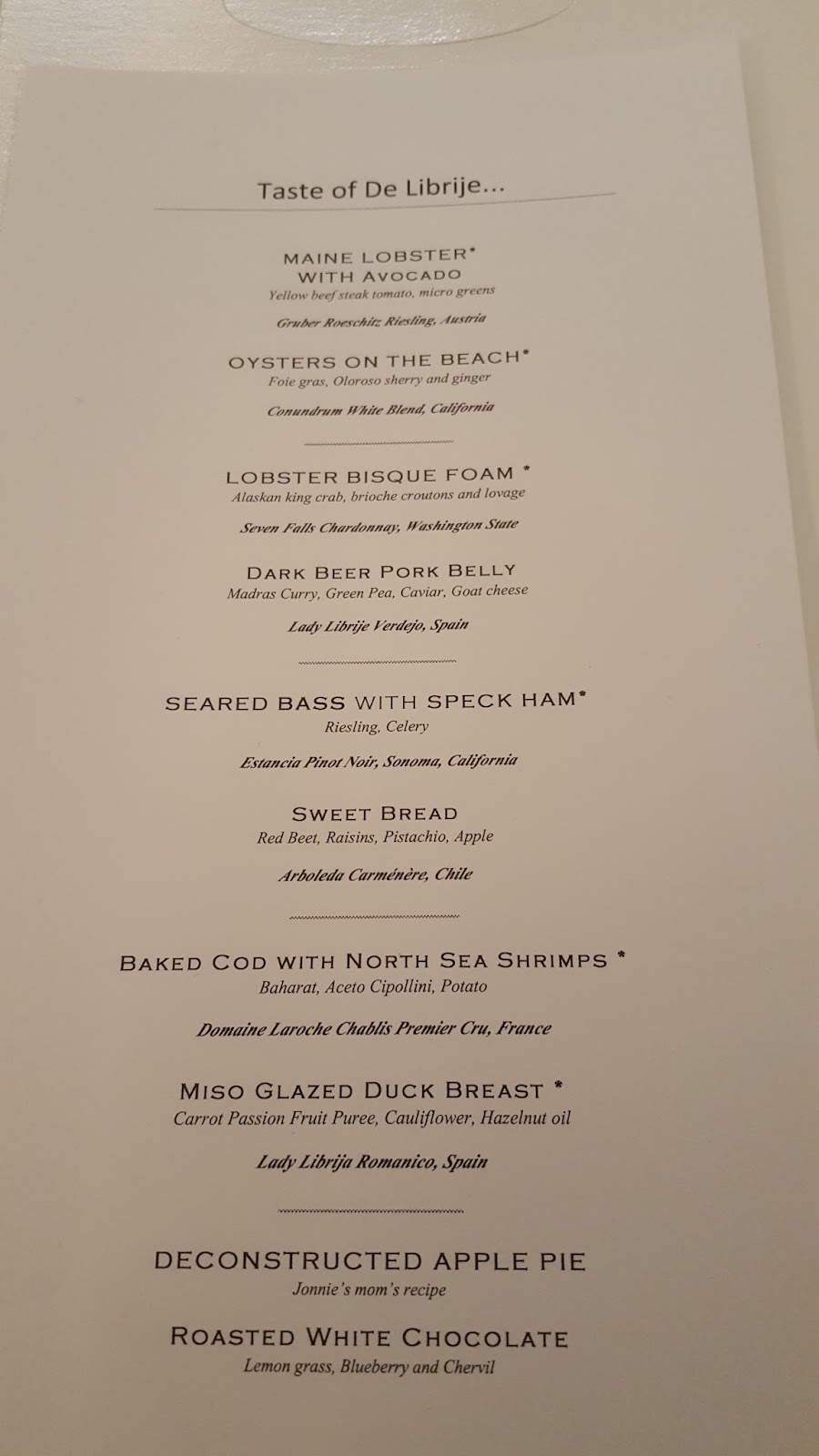 Sel De Mer - This is an ala carte restaurant serving mostly seafood.  The highlight here was the Salt-crusted Branzino.  A mild fish brought to life by the salty crust. The escargot were also delicious - served the way they come from the sea in their shells. 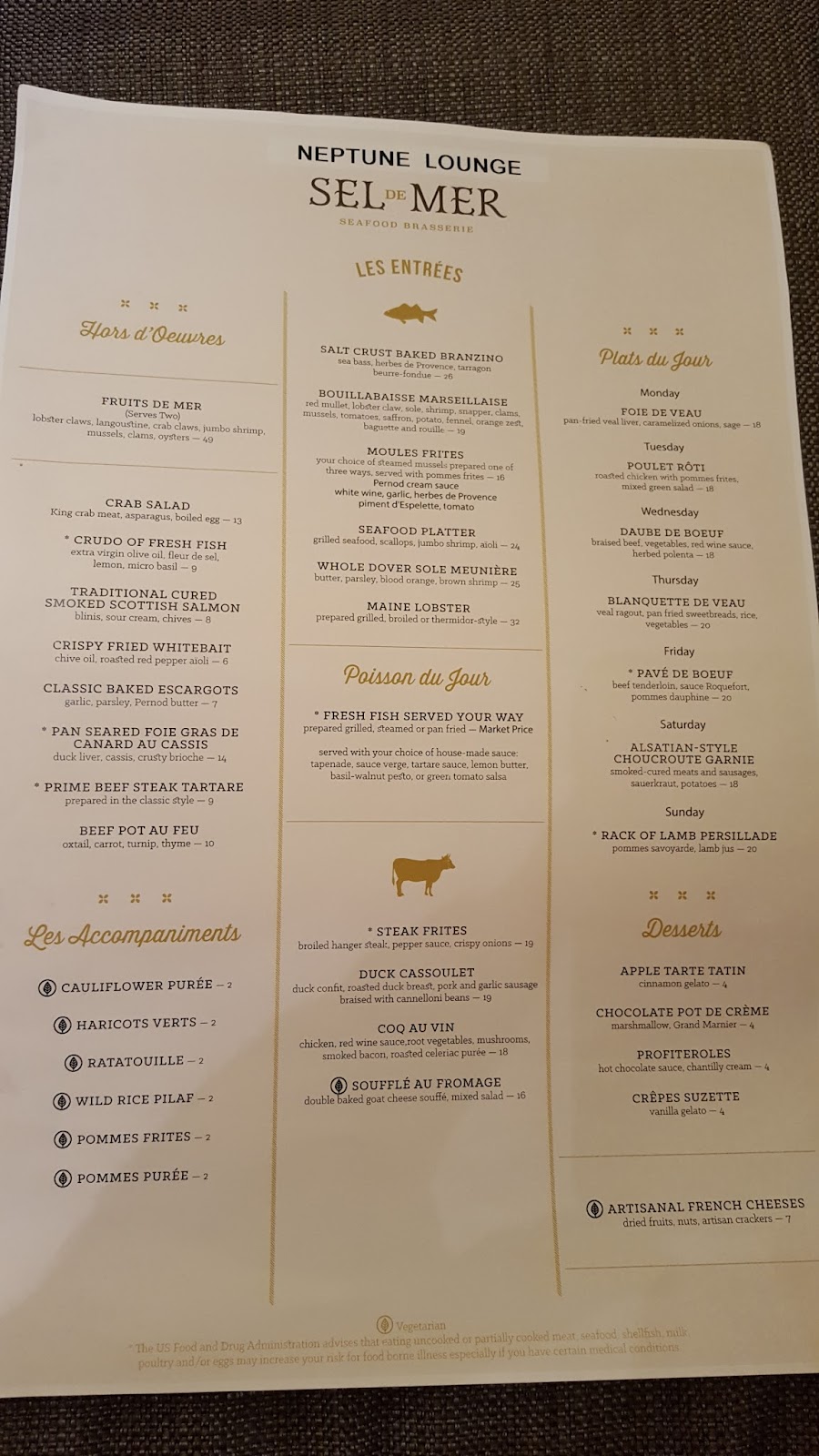 Cooking  Theater (soon to be renamed America’s Test Kitchen) - This was an experience where you got to watch the chef prepare the four course meal.

Dutch Cafe - The food here is included in your cruise fare.  They had great split pea soup here. Also their frites (or fries) were tasty.  This is also the coffee shop for your speciality lattes and cappuccinos.

One of the low points on the ship is the main dining room.  We had arranged for anytime dining and when we showed up, it was going to be almost an hour wait for a table.  When I sailed it seemed as if the dining room was not prepared for the number of guests that were sailing.  We ended up leaving and getting a table at the Pinnacle Grill instead.  We ate at all specialty restaurants for dinner the rest of the 7-night cruise.  Recent reviews suggest that the dining room has gotten better.  But when the ship has all the great specialty dining available, that is hard to pass up if you like interesting entrees.  The service in each of the specialty restaurants was also attentive and friendly.  For me, these restaurants alone would make me want to sail on Koningsdam again.

Cabins on the ship are stylish but not showy.  We were in a Neptune Suite which was very nicely appointed.  Huge bathroom with double sinks and larger shower. 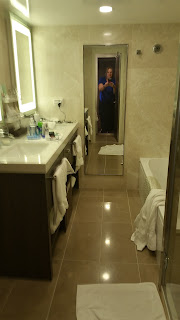 You also have access to the Neptune Lounge which has snacks during the day, coffee and soft drinks.  There is also an honor bar where you can make your own drinks and have them charged to the room.  The alcoholic drinks aren't covered by any beverage package you may have purchased.   I saw pictures of other suites and they were very nicely decorated in neutral tones.

The entertainment onboard is mixed,   There is a great BB King Blues Club where each night they had a rocking band that had the dance floor filled.  There was always nightly trivia.  There was also a dueling piano bar concept called Billboard where each night which got everyone singing.  This was also an area where they had light snacks being served during the entertainment Two of the entertainment venues weren’t my style and were a low point for the cruise.   Koningsdam designed a very different concept for the main show room called the World Stage.  It is a theater in the round instead of a traditional, elevated curtained stage.  The seats are set about 240 degrees around the stage. 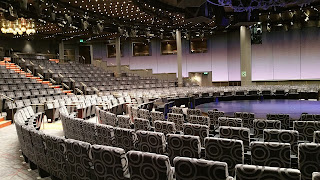 While the shows utilized the space, they weren’t very interesting.  There were some spectacular uses of lasers and lights during one performance.  The other venue I didn’t care for was the Lincoln Center Stage.  This featured violinists, and cellists in a chamber music setting.  I have nothing against this type of music and probably would have enjoyed it in a different setting.  My issue was it was in an open area that was a common area to pass through to get to other venues.  If you made even the quietest of noises, you could get a glance (or stare) from one of the other passengers watching the performance.  So it is great that HAL has some different entertainment, just seems  like it would be better in a different space.  I also saw this as something they needed to attract some of their long-term guests on this new ship.

We has purchased a beverage package so were able to have mixed drinks and wines included for the week.  We found service was excellent at most bars. My favorite was the Ocean Bar which is near the lobby.

Highly recommend the behind the scenes tour if you have time. It is done over two days (about six hours total) and was the most extensive tour I have done.  We were able to go down several decks in the engine rooms and also had a long discussion with the hotel manager.  Always so interesting to talk to these dedicated crew who have built their careers at sea.

The summary of this ship is to book it if you want the most interesting dining experiences at sea.  Don’t go if you want 24 x 7 entertainment as there still isn’t much happening after 10PM on most nights.    There are better ships such as Norwegian for that type of entertainment.

If you want to explore if the Koningsdam is right for you, email us today.