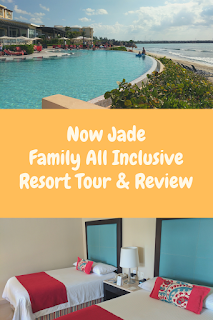 Allison B and her husband booked an all-inclusive resort vacation in Riviera Maya, Mexico for her family including an 8 year girl and 5 year boy to now Jade. We decided this would be a great fit for her because of the fun activities, different choices for restaurants, and overall modern vide of the resort.

You can take a peek with my 3 minute resort tour below:


Here's what she thought:

Our vacation was wonderful.  We had a fantastic time!

We really liked a lot of things about Now Jade.  It's a beautiful resort.  When we arrived, they met us outside with champagne for the adults and Shirley Temples for the kids.  We then walked into the lobby and were amazed by the gorgeous view and the attentive staff.  Our room was lovely- very pretty and clean, although smelled a little bit musty.  Although we had paid for a garden view, we were super lucky to actually have a pretty decent ocean view. 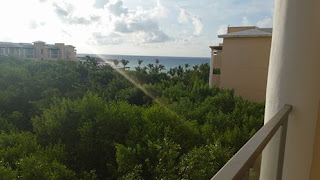 Our balcony was spacious, which allowed us to enjoy that view.  The one thing that our room didn't have that we really needed was conditioner, which was problematic when you have two girls with long, curly hair.  I usually travel with it but left it out this time since I figured a nice resort would definitely have conditioner!  I guess not- oops!

I had read online reviews that said the beach wasn't that great.  We actually thought it was nice.  The staff did an excellent job of keeping the seaweed cleaned up.  Although neighboring beaches were very rocky, ours was smooth.  The water was very pretty and clear too.  The kids loved playing in the same, and we felt like they were safe doing so.  There was plenty of distance to walk up and down the beach too.  Running down the beach was a little more challenging due to the rocky parts at the neighboring resorts, but the resort gym is really nice and not very crowded.

We generally spend more time at the pool, and this trip was no exception.  The pools were gorgeous.  There was even an infinity pool close to the ocean that had pool seats built into it. 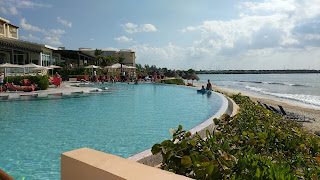 The main pool was very large and had a swim-up bar.  There were plenty of chairs around the pool but a limited number of umbrellas (that were fixed in place).  Although the resort policy stated that if you left your belongings at a chair for longer than a half an hour that they would be turned into lost and found, that was never enforced.  It ended up being like every other place we have stayed at where people throw their stuff on a chair with an umbrella or under the pergola early in the morning and leave it there all day (and use it for maybe 30 min out of the day).  We actually spend more of our time at the pool, so we have to play that game too by getting out to the pool around 7am to get seats under an umbrella.  The pool atmosphere was really nice.  In the morning, it was very calm and relaxed.  In the afternoon, part of the pool is a little rowdier when they start playing volleyball, and the other part is crazy when they play some games.  Unlike most resorts we have been to, a lot of people seemed to participate in the activities they put on.

There is WiFi throughout the resort, and it's pretty fast.  Each room has its own WiFi connection that you access with your last name and room number.  The pool and several different areas have their own connection as well.  We never had trouble getting connected or had issues with speed.

Initially, we felt bad about having our kids go to the Explorer's Club.  We took them for a couple of hours one day (they give you a pager and will beep you if they need you).  Our kids really loved it!  In fact, they were even disappointed that they couldn't go on the days that we were on excursions and probably would've stayed all day if we let them.  We ended up taking them for 2-3 hours each day that we were at the resort.  They loved the activities (face painting, donut eating contest, etc) and VERY cute crafts (an octopus out of a recycled water bottle, a balloon filled with sand that they decorated to look like themselves, etc) that they got to do.  They also loved that the Explorer's Club went to the buffet for lunch where they could pick anything they wanted to each (and my husband and I liked that it allowed us to go to a sit-down restaurant and have a nicer meal).  The Euro-bungee is sooooo much fun.  It's at 3pm every day, but that's the only time it's offered.  You have to sign your kids up by a certain time in order to be able to do it (I want to say noon, but I don't remember for sure).  If your kids are at the Explorer's Club at 2:45, they will page you, and you have to come check them out and then supervise them at the Euro-bungee.  The "camping" night on Friday was a hit with our kids too.  They painted their faces like natives and then took pillows out to the lawn where they watched a movie on the lawn.  I have to say that the staff of the Explorer's Club were probably the nicest and most professional that we encountered.  We were thoroughly impressed.

I believe we tried all of the restaurants.  There is one adults-only restaurant, and we were able to try it while the kids were "camping".  I think our favorite restaurant was Spice, the Asian restaurant (their regular menu, not the Hibachi-type meal).  Ryan and Keira went to Hibachi one night that Elliott and I had room service because he was too tired.  They reported back that the meat wasn't seasoned very well, but the fried rice and vegetables were excellent.  The kids liked that every restaurant offered a kids meal- the standard chicken nuggets, spaghetti, macaroni and cheese, etc. so that they could order off of it if they didn't like what else was on the menu.  Overall, the food was delicious.  The only issue that we had was one morning at the buffet, I went to take a bite of my eggs and found a giant dead horsefly in them.  I showed the waiter, and he took my plate away, apologized, and then promptly removed the entire pan of eggs from the buffet.  There are some made-to-order options at the buffet, like omelets and crepes.  There is something for everyone.

We were really impressed by the entertainment in the evenings.  Every night, they would have 2 movies and would have self-serve pizza, french fries, and popcorn.  I believe one movie started around 7pm and then the other at 10pm.  The earlier one would be a kid friendly one and were all recent movies that our kids actually had an interest in seeing (Zootopia, Home, Boss Baby).  Sometimes they were in the theatre, sometimes out on the lawn.  It depended on where the live entertainment act was going to be.  Live entertainment usually started around 8:30pm.  The fire show was thrilling and entertaining.  I really enjoyed the Beatles Love show and the Circus (more like a cirque show).  I really thought the entertainment was the best we've experienced at an all-inclusive resort.