What to do on a Rainy Day at Disney World 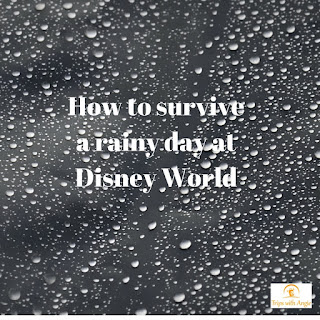 This week's Travel Thursday is all about rainy days at Disney World.

When you find yourself at Disney World in the rain, you have a choice are you going to embrace it or avoid it.

If you're going to embrace it, then be sure to pack an extra set of clothes in your bag. You will get soaked as you run from ride to ride and play in the rain.

If you're going to avoid it, I recommend high quality ponchos. Disney World sells them. They are expensive, but worth it. We keep ours in our Disney bag. They are heavy duty. The key is to bring an extra plastic bag to put them in when you go inside. You gently take off the poncho and fold it protecting the dry inside and place it in the bag.

The second tip is find the key places in the each park where you can seek cover and still have a good time.  In general, you'll want to find an attraction with a long indoor line or a less popular attractions that lasts 10 - 20 minutes.

Magic Kingdom
Options that generally have a long line that is mostly indoors: Peter Pan's Flight, Pirates of the Caribbean, Buzz Lightyear's Space Ranger Spin,  Character Greetings at Fairytale Princess Hall, Pete's Sideshow or Town Square Theater, and The Many Adventures of Winnie the Pooh.

Less popular options that are longer are PhilHarmagic - a 3D movie, the Country Bear Jamboree and The Hall of Presidents.

For those shows,  you just have to time it to when the attraction is starting because otherwise, you could be waiting another 20 to 30 minutes for the show before you to finish. Dumbo the Flying Elephant has an indoor playground as its waiting area. If it's not raining too hard, you can also ride the train around the Magic Kingdom.

Epcot
Epcot is a great place to get caught in the rain. All of the attractions are indoors and all of the lines are indoors. In Future World, most of the attractions have' an area as you exit the ride where you can play with interactive exhibits. You don't have to go on the ride to access those areas at Journey into Imagination, Test Track, Spaceship Earth, or the Living Seas.

Innoventions is a large pavilion with different displays.  The character greeting space is also indoors.

Hollywood Studios
You could camp out in Launch Bay or  in line for Toy Story or Star Tours. You could enjoy The Great Movie Ride, The Little Mermaid show or the Frozen sing-along.

If you have questions or you are ready to plan your Disney World vacation, email me or set up a time to chat. Remember - my vacation planning services are free when you book through me.