In the summer of 2015, my husband and I and a group of friends took a Princess cruise from Anchorage to Vancouver.

It was an incredible experience. I'd love to book you on this type of Alaska adventure. You can email me at Angie@Tripswithangie.com or click here to sign up for a free 20 minute chat.

On Saturday, we boarded the Alaska railroad in Anchorage for a ride to Whittier.

We were in the back car on the second level so we had great views of the mountains. We saw two moose on the way. We  passed through a couple tunnels chiseled in the mountains. Boarding the ship was really easy. 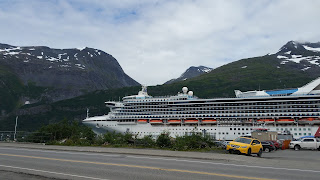 We had a great first lunch in the dining room. Dinner Saturday night was not as successful. We weren't at our assigned table and the service and food was not very good. Don't worry - it got A LOT better.  After dinner, we went up to the nightclub and enjoyed the great DJ. It was incredible to be sitting in the night club at 11 o'clock at night with a full daylight view. We even saw some otters.

On Sunday, the ship headed to Hubbard Glacier. In the morning, we attended a lecture from the naturalist on board. She had a lot of great info about glaciers and what our best opportunities for wildlife sightings would be. We played morning trivia and had a great pub lunch in the Crown Grill. We heard a pioneer filmmaker talk about living in Alaska and his National Geographic show - Dead End Express. We took a penny whistle class that comically serious. Imagine Glenn and I playing a recorder. Then we saw Hubbard Glacier.

The glacier is six miles wide. Entering the bay we saw icebergs with seals laying on top. We took turns going back and forth between our balcony and  our friend's balcony on the other side of the ship. The balconies on the Caribe deck are HUGE! 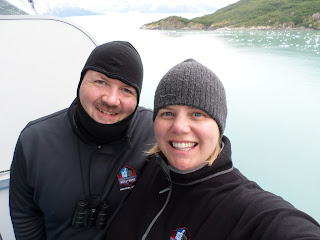 It was incredible. Dinner Sunday night was very good. It was formal night so Princess had their signature Champagne toast. 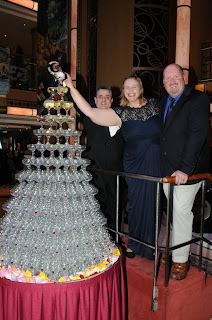 On Monday, the ship entered Glacier Bay National Park. We got up early and met the naturalist on the front of the ship. We saw otters and a pod of humpback whales. As we cruised through the bay, we enjoyed all the glaciers and commentary by the park rangers. At Margerie glacier we saw a huge area of the glacier calve off into the ocean.

The sounds of the glacier were incredible. It sounds like gun shots and thunder as pieces of ice break off. We had another great dinner. I had a great Thai halibut and the king crab legs were so delicious. This was the best menu we have ever seen on a cruise ship.

After two days of cruising and viewing glaciers, we were excited to hit a port in Alaska. Skagway is a small isolated town in Southeastern Alaska. When we visited, they hadn't had eggs in two weeks. A barge comes every Tuesday to bring supplies and they just didn't have any.

For Skagway, we signed up for two excursions. The first one was breakfast at the Red Onion Saloon and a Suspension Bridge in the Yukon of Canada. The excursion was well done. The Red Onion Saloon's history as a brothel was really interesting and a good glimpse into what the town must have been like during the Gold Rush. 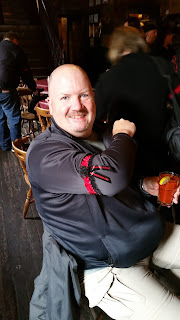 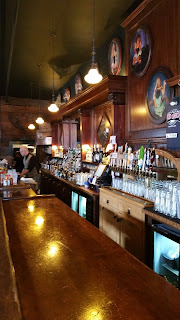 The scenery on the bus ride was great. The Suspension Bridge was cool and we got to try some Canadian beers. 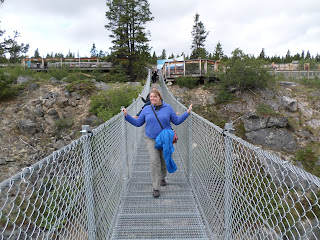 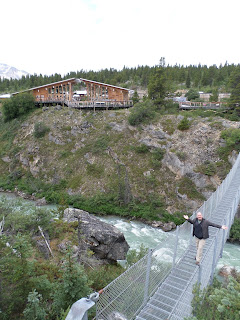 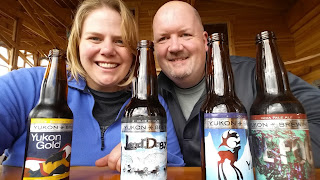 After the tour, we headed back to the ship for lunch. Princess highlights local food as part of the lunch offerings. Today, they were highlighting crab cakes. They were really good. 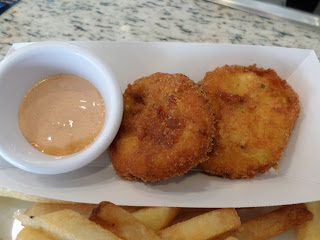 After lunch, we tried some beers at the Skagway Brewing Company and did some window shopping. We bought a bottle of Alaska Rhubarb vodka as a souvenir. Our second excursion was on the White Pass Railway train. It went the same way as the bus ride from the morning - just on the other side of the river.  The train had the best scenery. 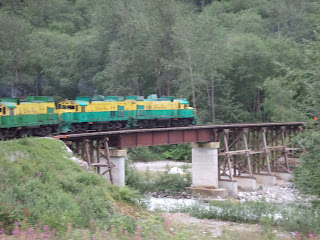 We arrived late back to the ship and headed straight to dinner. We had a scheduled dinner time that we really liked. We had a great team of waiters and a table by the window. After dinner, we would visit one of the several lounges that had live music. Princess also puts on shows in their theater.

The next day was Juneau. Juneau was one of the ports I was most excited to visit because the excursions are fantastic. We signed up for the Whale Watching and Mendenhall Glacier Photo Safari. I chose the excursion because it meant a small boat with windows that could open to take better pictures. Our guide was terrific, but he took the photo safari part pretty seriously. Let's just say he was not impressed with my hot pink Canon point and shoot. He would make comments like "For those of you who have cameras you can actually change the setting on...." It was pretty funny. 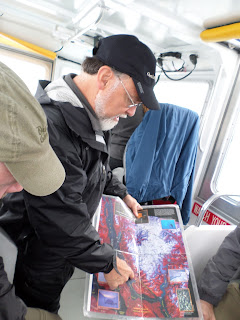 We board a boat to headed out. We were so lucky we immediately got reports of a group of Humpback whales in the area. We came across a group of 7 - 9 humpback whales playing. Three of them breeched. It was an incredible moment. I even got a little teary-eyed. But - I didn't get any pictures. I'll just have to remember it always. Pro tip- once your guide says whales are reported - just turn on your camera's video and point it in the direction you are headed. You can always pull stills from the video later. 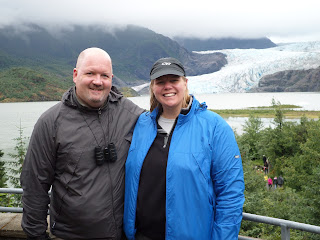 After the Glacier, we head back to town. We got dropped off in town and explored a couple local bars and had a great lunch at a local cafe. We had a great dinner and enjoyed listening to Mosaic - the party band.

Ketchikan turned out to be my favorite port. It's the port I am most excited to return to. We headed out in the morning on an Eagles, Totems, and Lighthouse excursion. This was the perfect excursion after so many intense excursions. The Captain was a little odd. He reminded us of a Jim Carey character in a movie making fun of people who go on these type of tours. Here's the Captain: 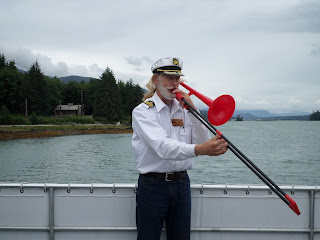 We saw several bald eagles, got a glimpse of the famous Totem poles and did see a lighthouse.

After the tour, we headed into town. The Maitre'D had recommended the Burger Barn for a good burger. We hustled over there, ordered a burger and headed next door to the Aslym for a beer. It took about 30 minutes for the burger. It was good.. really good. We headed over the Great Lumberjack Show. 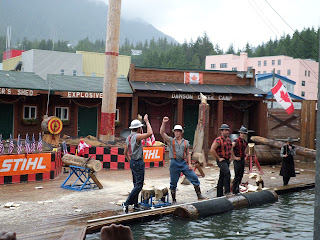 I loved it!! It was so much fun! It was about an hour show going through some key challenges. I liked the corny jokes. It was worth the price of admission.

We headed back to the boat to prepare for the 2nd formal night. This was lobster night. 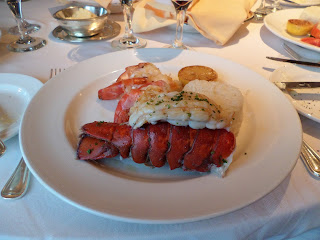 We were pleasantly surprised it was Maine Lobster. We are used to Caribbean lobster on other Caribbean sailings.

That night, there was a balloon drop in the lobby to celebrate the 50th anniversary. Mosaic played and it was SO MUCH FUN! 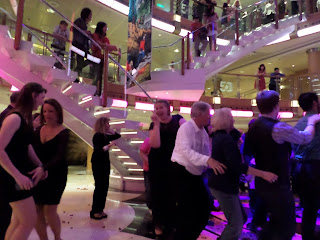 Our last day on the ship was a Sea Day. We decided to do a pub crawl heading to all the bars on the ship with our friends Tom and Margaret. In retrospect, it was a little weird to take the most beautiful, warm day we had with amazing scenery to hop from bar to bar, but it was a blast! Everyone on the ship was enjoying the fantastic weather.

We pulled in Vancouver in the early morning. We decided to head straight home because we figured we would be ready after 16 days in Alaska. We were right.

Our cab ride through Vancouver  left us wanting more. I can definitely see us heading back there for a 3 - 4 nights.

We had a quick and easy experience leaving Vancouver - especially because we have Global Entry. It's great you clear US Customs and Immigration before you even board the plane.

We had an easy flight home connecting through Houston.

Re-entry was a bit rough. This was one of the toughest jet lags I've experienced. The only other one as bad was Japan. I think it was the combination of having trouble adjusting to the 4 hour time change on the front end because it never go dark and just enough of a time change to make things a bit difficult.

I'd love to book you on an Alaskan cruise. I have so many more tips and insights to share. It's really an incredible experience. Send me an email at Angie@TripswithAngie.com or  click here to sign up for a free 20 minutes chat.