My husband and I visited Shanghai in 2010 and 2012. We loved how easy it was to navigate around Shanghai on the subways. The city is an interesting mix of new buildings and Chinese people living traditional lives. Below are some of the places we visited:

Yu Garden - Yu Garden is in a section of town called Old Town. It’s winding, narrow streets filled with tiny shops, then you come across this walled off garden. The garden is filled with beautiful rock structures, waterfalls, and small canals. It was really lovely. It was built by a high ranking official during the Ming dynasty.

People’s Square and the Shanghai Museum: Both were very nice. We toured the jade, bronze, furniture, and currency exhibitions at the Museum. The People’s Square had a central park type of feel.

Bund Sightseeing Tunnel: This Tunnel was hilarious! It’s a cheap Disney ride that transports tourists from one side of the river to the other. You board single train cars that go on a track through the tunnel passing through paradise, hell, the sky and the underwater world – all designated by different colors of lights. So funny! On the other side of the river, we had a lovely walk down the Riverside Promenade.


Nan Jing Road - Mecca of shopping. It’s neon-upped just like Times Square and just as busy. It was fun to walk through all the shops and I got a few bargains.
Fuxing Park - It is an amazing park. It was so great. There were so many there doing their “morning exercises.” This means people were out practicing revolution songs of their youth, practicing calligraphy using water on the sidewalk, practicing tai chi, ballroom dancing, line dancing to “Santa Claus is coming to town”, playing badminton and practicing kung fu. It was just so cool. We walked around. A man who was drawing calligraphy on the sidewalk stopped us and wanted to write a special message for us. He wrote “Happy New Year” and “Wishing you Happy Travels”.
Tianzi Fang - set of alleys filled with shops and restaurants called . It was tiny little shops where the owners lived upstairs. It is also the home to many artists and their galleries.

Jade Buddha Temple - It’s the first Buddha temple we visited. The smell of incense hung in the air. We first visited the Hall of Kings – where the four kings reside. Together, each of the characters of their names forms the phrase “Everything will be alright.” Then off to see many different Buddha with the final Buddha – the jade Buddha in the reclining position. It was a little disconcerting to see such a relic smack dab in the middle of a gift shop.

Oriental Pearl Tower – one of the tallest TV towers in the world. We headed up to the observation deck. It was a pretty good view even with the pollution. One of the coolest parts was one floor down where they have a skywalk – an observation deck with a see through floor. It was really cool and a little scary. Back down on ground level, we wandered through the museum. It had stamps from the Communist regime where people were paid with stamps instead of currency. For instance, you could get a stamp for food, furniture, bus pass, a bike, etc. Then we walked through the depictions of Shanghai over the years.
Boxing Cat Brewery - an American style micro-brewery. We tried the four beers on tap: Stout, IPA, Vienna Lager, and the Light Lager. The IPA and Vienna Lager were very hoppy. We got a chance to meet the brew master and he was fascinating. He is originally from Houston and has been in Shanghai for three years. He has to import all his ingredients. The hops are the most difficult to get and he resorts to having friends who are coming to visit bring the hops in their luggage. He has to tailor his beer to the ingredients on hand which can be quite a challenge. We also had dinner there – a shrimp po’boy and a hamburger. We definitely needed a break from the Chinese spinner dinner. 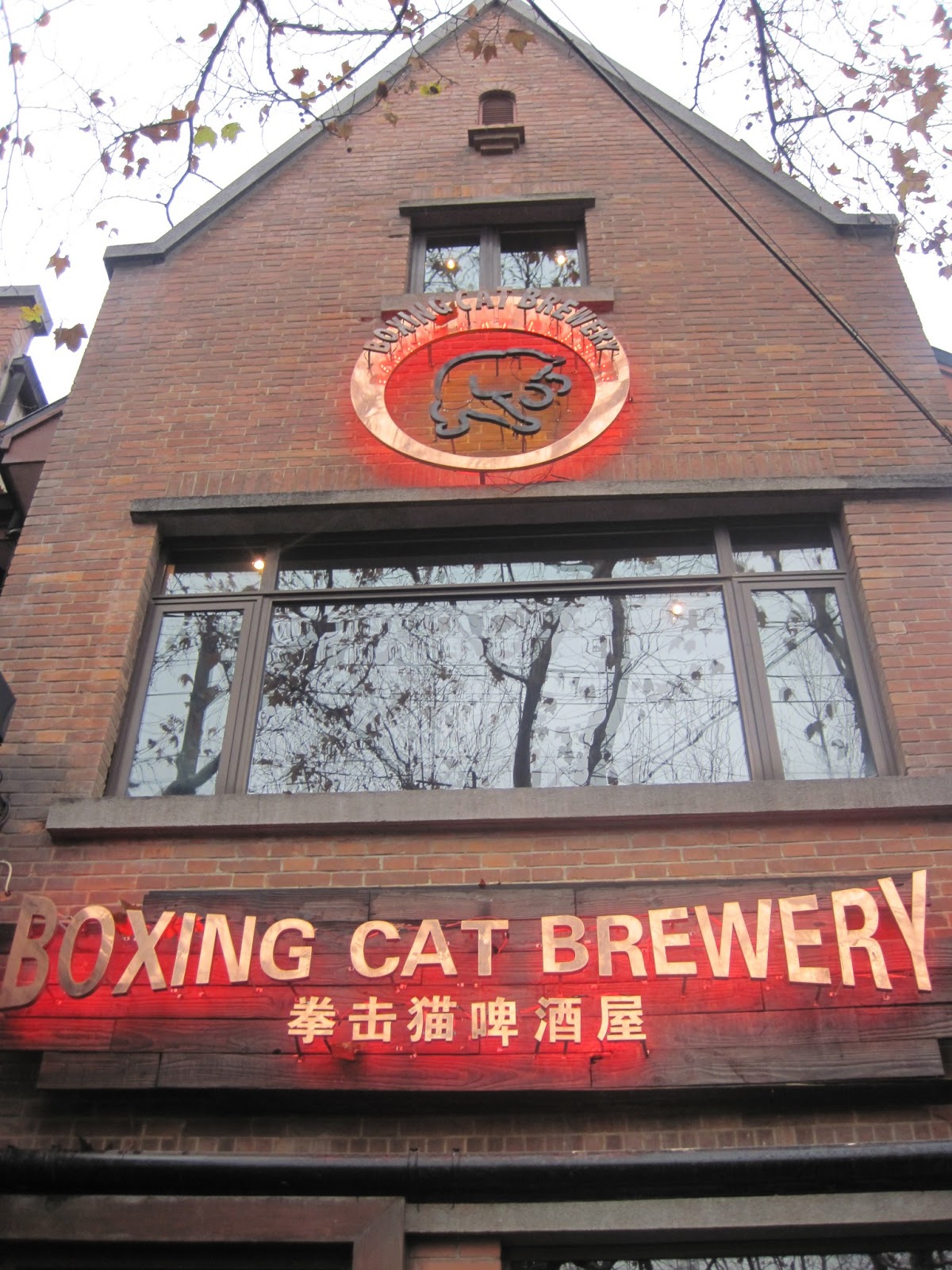 Marriott Courtyard Puxi Shanghai - The Marriot is very nice. Our room had a king bed with a glass walled shower looking into the bedroom. Don't worry there was a shade. 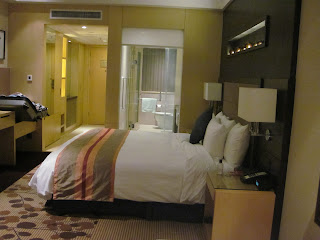 The shower had a rain showerhead and a regular showerhead that could be used at the same time. It was one of the nicest rooms both Glenn and I had stayed in. When we arrived, it was raining and cold so Glenn and I decided to just have dinner at the hotel restaurant. I ended up getting some fantastic carrot soup and a great Black Cod dish.
Propaganda Art Centre - A museum dedicated to Chinese propaganda. It’s a little weird because it is in the basement of an apartment complex in the French Concession. Admission was US$4 a person. It features propaganda posters from the 40s thorough the late 70s. Very pro-Russia and anti-American posters in the early years. Lots of pro-worker, we will rise together, and join Korea messaging. 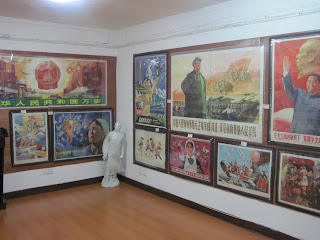 Surprising to me were the posters calling for support of the US Civil Rights and the US Anti-Vietnam movements. It was also interesting to see how the messaging moved to anti-Russia statements towards the 70s. I was surprised by the hand written signs containing quotes from Mao and indictments of neighbors and friends who weren’t supporters. Mao supporters would hang these indictments up in their neighborhood on any open surface. 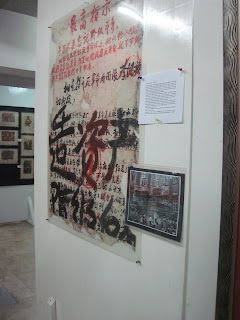 Yang's Fried Dumplings - It's a famed dumpling shop located in a shopping mall. We bought four dumplings for US$1. The dumplings were steaming hot and the liquid poured out when I bit into them. 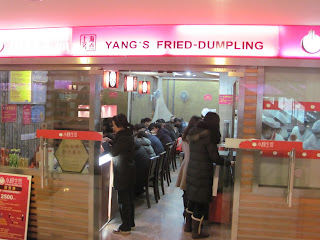 Xian Nan Guo Spa - This was definitely a locals’ place. It is affiliated with and located behind a well-known dim sum restaurant Xian Nan Guo. We were told to follow the signs through the alley. 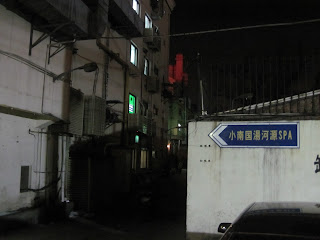 We were pleasantly surprised to emerge from the dumpsters and employee parking to find a four story building. We turned in our shoes, got slippers, and headed to the separate men’s and women’s areas. It was time to take it all off. No one spoke English, but they pointed me to where to shower and then head out to the whirlpools, steam room, and saunas.

After the whirlpools and steam room, I changed into their Hawaiian print pajamas and headed up to the 4thfloor. The second floor had a café for dim sum. The 3rd floor was private mahjong and game playing rooms. The 4th floor had a VIP area, treatment rooms and the recliner room. I walked into a room with 125 recliners, each with their own tv. From here, we ordered juices, dim sum and received an intense 90 minute foot massage. I squirmed a little bit as the masseuse applied pressure to my sore feet. The foot massage even included cupping – where the masseuse heated the inside of a glass cup and applied it to the bottom of my feet. The heat creates a suction to increase blood flow. This was so weird at first and I won’t try it until my husband assured me that it did not hurt. It ended up being the most relaxing part of the massage. After five hours there, we figured we should head back to the hotel. The five hours, scrubs, massages, juices and dim sum all totaled $110 for the two of us. Just awesome!

If you have any questions or want to book a Shanghai adventure for yourself, email me at tripswithangie@gmail.com
Posted by Angie at 6:00 AM