Things to Do and Virtual Tours: San Juan, Puerto Rico 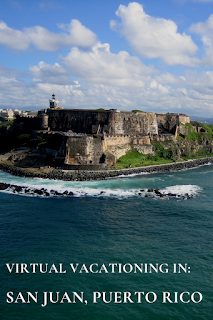 For this week’s Caribbean port of call we are going to check out San Juan. Not only is it a popular port of call found on Caribbean itineraries it is also an embarkation port for many Southern Caribbean cruise itineraries. About 500 cruise ships call on San Juan each year, the port itself is the largest and busiest in the Caribbean with two separate terminals hosting more than 2 million cruise visitors each year.

Founded in 1521, San Juan, the capital of Puerto Rico is the oldest city under U.S. jurisdiction. It has one of the biggest and best natural harbors in the Caribbean. The metropolitan area has 3 distinct districts, Old San Juan, the Beach & Resort area, and the outlying communities. Now let’s check out some highlights of this port of call!
Old San Juan is known for it’s rich history, five century old forts, Old World elegance, exquisite food and festive atmosphere. Let’s first take a look at two of the most important citadels.
Castillo San Felipe del Morro is a 16th century citadel located on the northwestern-most point on the island. This 6-level fort played an important role in protecting the island from invaders. It is one of the most visited attractions in San Juan and offers stunning panoramic views of San Juan Bay and the Atlantic Ocean. Castillo San Cristóbal, is considered the largest fortress built in the Americas. It was built to protect the city of San Juan from attack by land from the East and took over 150 years to complete. To learn more about these to sites, click here.

Other historic sites to check out in Old San Juan include Capilla del Cristo, Santa María Magdalena de Pazzis Cemetery, Casa Blanca, which is the oldest residence in Old San Juan and the home of Juan Ponce de Leon and his decendents, Catedral de San Juan, the second oldest church in America, and La Fortaleza, the oldest state residence in the New World still in use. For a short virtual walking tour of some of the highlights of Old San Juan, click here.

The food in San Juan is known for pushing boundaries, blending tradition with Spanish, African, and French influences. Some popular dishes includes Mofongo, Pastelón, Alcapurrias, and Lechón. To see some more of the local food and drink, check out this virtual food tour.

Close to Old San Juan is Escambrón Marine Park, the perfect place for first-time scuba divers, snorkeling, kayaking or just a relaxing day at the beach. The reefs are home to a diverse and abundant marine life living in over 200 artificial reefs. The fish are used to divers and often swim near their human visitors. Watch this video for more information about the park and to take a virtual dive.

Check out this virtual tour of the Bacardi Rum Factory and learn a little bit about the process of rum-making. In person factory tours are offered with a variety of experiences including a mixology class.

Thirty miles east of San Juan is El Yunque National Forest. It is the only tropical forest in the U.S. National Forest System. At close to 29,000 acres it is one of the smallest in size, yet one of the most biologically diverse. For a quick tour visit this link.

Located inside Sacred Heart University is the Puerto Rico Museum of Contemporary Art which is the place to see the work of Puerto Rico’s modern day artists. Changing exhibits showcase collections include island-made prints, paintings, posters, and sculptures.
Beaches
The Condado District offers a vibe similar to Miami South Beach with a stunning beach backed by a lively neighborhood.
Nearby Isla Verde offers some of the most beautiful beaches in the area including Playa Crash Boat, and on the west side of Puerto Rico check out Boqueron Beach in Cabo Rojo.
Excellent snorkeling and diving can be found off the nearby islands of Culebra and Isla de Vieques.

Excursions
Some additional excursions available in San Juan include horseback riding, boat charters, and ATV adventures.
We hope you enjoyed this look at some highlights of San Juan, Puerto Rico.
Posted by Angie at 5:30 AM