Over the next few years, Disney's Hollywood Studios will add more and more Star Wars attractions as the new land is developed. Here's the latest updates:

Star Tours has a new journey inspired by the Force Awakens. It’s playing for all rides. 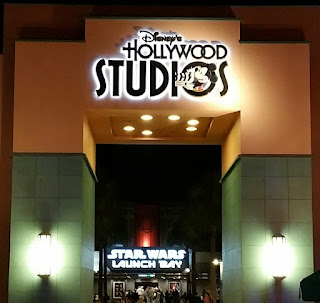 Launch Bay located in the Animation Courtyard near the Disney Junior Show offers:
·         A 10 minute video with exclusive interviews with the makers of Star Wars
·         A Character Meet and Greet with Chewbacca or Kylo Ren
·         Four galleries of Stars Memorabilia
·         A Game Center to play Disney Infinity
·         A Gift Shop

Jedi Training: Trials of the Temple - Kids aged 4 - 12 can battle Darth Vader in a light saber duel. This is an included activity, but availability is limited. You sign by going to the Indiana Jones Adventure Outpost. To find it, walk down the main walkway into Hollywood Studios. Take the first right down the street in between the two gift shops. Keep following that road past Hollywood and Vine and the 50s Prime Time Café.   A little warning: This show cancels for even a drizzle. If the weather report isn’t looking good, you may want to try for another day.

Star Wars: Path of the Jedi is basically a trailer for the Force Awakens.

Symphony in the Stars is a fantastic fireworks show at 8:00 pm nightly. The fireworks shoot off directly over the Chinese Theater. There’s a fun dance party before the show begins.