Things to Do and Virtual Tours: St Thomas 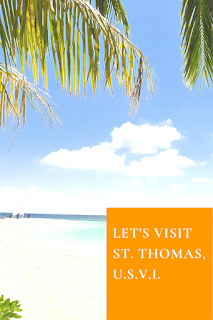 For this week’s virtual port of call visit we are going to check out the island of St. Thomas. I will always remember St. Thomas as the first port of call I ever visited on the very first cruise I ever took when I was 12.

St. Thomas lies about 40 miles east of Puerto Rico. The chief island of the U.S. Virgin Islands, the port, Charlotte Amalie is the capital of the U.S. Virgin Islands. Founded in 1666, the island’s deepwater harbor was a haven for pirates. The island was originally owned by Denmark, and visitors will find that the houses and narrow streets have distinct Danish architecture and Danish names. The island is largely mountainous, so many roads around the island offer terrific panoramic views of the island and ocean. Popular excursions on the island include snorkeling, scuba diving, windsurfing, kiteboarding, sailing, fishing kayaking and parasailing. Let’s see what else this island paradise has to offer!
To get around the hills of Charlotte Amalie, the Danes constructed several deep stairways. The most famous one, 99 steps ultimately leads visitors to Blackbeard’s Castle. Built in 1679 it was originally called Skytsborg and was constructed to protect the harbor. Legend has it that the notorious pirate, Edward Teach, better known as Blackbeard sailed these waters during the Golden Age of Piracy.

Speaking of pirates, the Pirates Treasure Museum offers hands-on, interactive exhibits exploring the history of pirates in the Caribbean. The museum offers its own YouTube Channel with an 8-part mini-series highlighting the exhibits, artifacts, and stories within the museum.
Take the Skyride to Paradise Point, the tram takes you above Charlotte Amalie, up Flag Hill at a height of 700 feet. Once at the top enjoy the view as well as live entertainment, dining and shopping.

The newest attraction in St. Thomas is the Phantasea Botanical Garden which took more than 20 years to create. The garden is home to more than 1,000 orchids, hundreds of bromeliads, heliconias, gingers, palms and other flora native to the island.
Located on the north side of the island, Magen’s Bay Beach features a well-protected white sand beach that stretched for nearly three quarters of a mile. The beach offers lifeguards, restrooms, changing facilities, and food and beverage concessions. There is a $5 fee for ages 12+.

Drake’s Seat offers one of the most panoramic views of Magen's Bay and the British Islands to the East. Legend has it that British privateer Sir Francis Drake, used this spot to spy on enemy ships of the Spanish Fleet.

Coki Beach is more of a party beach atmosphere than Magen’s Bay with live music nearby. The beach is lined with vendors selling everything from jewelry to food. The translucent waters are full of tropical fish and snorkeling equipment is easy to rent. The beach itself is free, and because of this can get crowded.
Located next to Coki Beach, Coral World Ocean Park offers five acres of tropical landscape, aquariums, pools and walking trails. There is also a walk-through aviary, and offshore underwater observatory that lets visitors view ocean life 15 feet below the surface. Check out this highlight tour of the facility:

Other great beaches to check out on St. Thomas include Sapphire Beach, Cowpet Bay and Secret Harbor on the East End, Brewers Bay located on the West End and Bolongo Bay on the Southside.
The island offers many different excursions including kayaking, snorkeling, scuba diving, snuba, parasailing, and tours of nearby St. John. Known for its lush greenery and white sand beaches, St. John also offers an amazing National Park that occupies more than half the island. It is home to resident and migratory birds, including cuckoos, warblers, and hummingbirds. The mangroves in the east support the corals and anemones. The surrounding waters are home to dolphins, green turtles and hawksbill.
To learn more about the U.S. Virgin Islands including St. Croix, check out this video by Expedia.
Posted by Angie at 8:15 AM