Melbourne Free Tourist Shuttle
The free tourist resources in Melbourne are terrific. The City sponsors a free hop on/hop off tour that goes to the major sites in the city. You can pick up a map at that terrific Tourist Information Center in Federation Square or look for these signs: 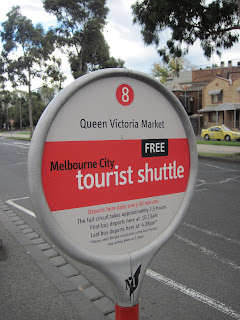 The information center also offers a free city tour and brochures, maps and resources for Melbourne and the surrounding areas.

Phillip Island Nature Parks
This area is worth a stop. It houses a Koala Conservation Center where you can observe koalas in their natural habitat. 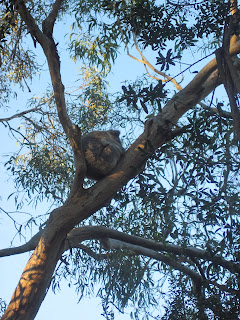 The absolute highlight is the parade of penguins. Phillip Island is home to a colony of little penguins. At sunset each night, you can watch them parade back up to the beach to their burrows in the sand dunes. We upgraded to the private penguin experience and it was so worth it. A ranger greeted our group of eight. We got a chair to sit on the beach, binoculars, and a headset to listen to him. He led us through the center explaining the history of the center and the penguins. The penguin colony was threatened by a group of imported foxes and a housing development. The government began an aggressive program to buy back the houses and the rangers continue to work to remove foxes from the island. We walked along the boardwalk and looked at the burrows. Then we headed down for our front row seats on the beach. It was amazing watching the penguins group up, debate whether to risk the run up the beach, run back into the water and the try again, and then do it. They have navy blue feathers to protect them from birds of prey on the top of the water. After they run up the beach, they head to their burrow. We saw male penguins fighting. We saw a male try to mate with a female, then another male intervened and a fight broke out. We saw two penguins jump off a curb and headed off down an alley. We saw two partners preening each other. It was the amazing. We’d like to share it with you, but photographs are not allowed because some idiots refused to turn off their flashes. The other amazing thing was the night sky. The stars and "spilled milk" from the milky way were breath taking. It was an amazing experience.  You can choose to visit Phillip Island through a tour operator or by renting a car and driving yourself to the area. It's about a 2 and 1/2 hour drive from Melbourne. 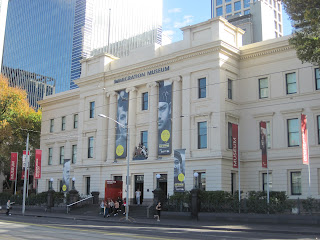 The museum tells the history of immigration in Australia - the sponsored trips from England for both convicts and settlers, the anti-Chinese policies, the internment of Germans during World War II, the dictation tests to work around laws preventing discrimination based on nationality, the refusal to grant asylum to a tanker of refugees, and the very limited allotments left today. The museum had a special exhibit on identity that did a terrific job addressing stereotypes and how people are more than what they look like. If you visit the Immigration Museum, it's worth a walk across to the South Promenade to visit one of the many riverside restaurants with lunchtime specials. 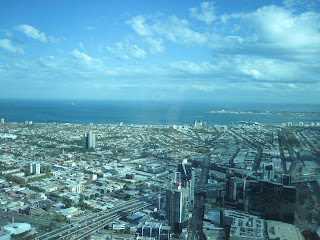 The views are incredible from the Eureka Sky Deck 88. It is such a great perspective to get up so high and see the city. We decided not to do the Edge experience because it is only small room hanging over the edge. Plus you can't take your own pictures inside. The 360 degree views from the SkyDeck definitely satisfied our desire for great views. 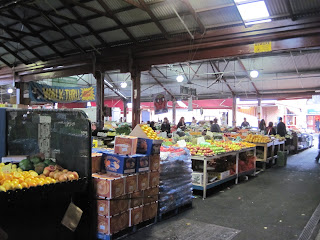 Queen Victoria Market is a great market. It offers tours and cooking classes. We did one of the cooking classes and really enjoyed it. It was a nice way to learn from a local chef, learn more about the Melbourne dining scene and meet some local residents. I highly recommend it if you enjoy good food or cooking.

St Kilda
We took the tram system down to St Kilda beach on Port Phillip Bay. We stopped at the Tourist Information Center at Federation Square to figure out the route and where to buy tickets. They make it so easy. We walked out to the pier, along the boardwalk and beach, and then through down Achland Road - the main strip with cute stores and cafes. The big highlight of the trip was lawn bowling. We went to the St Kilda Bowling Club, rented equipment and a lane for $10 per person per hour. Luckily, it wasn't busy so got to bowl for 2 and 1/2 hours for our $20. Lawn bowling is like bocce except the bowls are weighted on one side so it curves as it slows down. It was a gorgeous day. All the locals kept commenting they could not believe how great the weather has been. After bowling, we headed back to the beach for a pre-fix meal ($25) at Beachcomber. 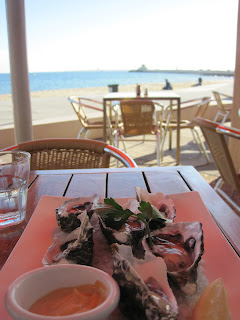 We finally tasted some Tasmania oysters and they were fantastic. I also had chili mussels and kingfish. Glenn tried the fish and chips.


Brunswick Street in Fitzroy District
Brunswick street had been recommended by some of the people in our cooking class. It was an eccentric area with cool boutiques and lots of cafes and bars. Warning: Brunswick is an up-and-coming area so some parts looked a little rougher than we were used to. We saw more graffiti, trash in the streets and boarded up stores. However, if you venture a little far north on the street, you find some fantastic nightlife hot spots - like the  beautiful St Jude restaurant. 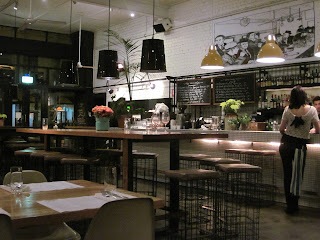 The menu was filled with interesting combinations and local ingredients. I recommend the warm Rainbow trout salad with caperberries. It was delicious.

For additional information, including my reviews of some local beers, feel free to comment below or  email me. 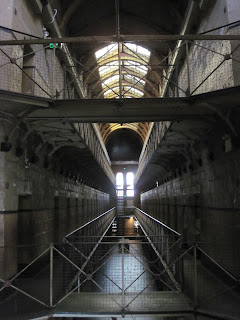 It is a fantastic museum.You can explore almost the entire Gaol that remains. Most cells are open and have informational signs about prisoners who were imprisoned there or history of the jail.  They also have an experience where they lead you through what it would have been like to be arrested. It takes about 45 minutes, is included in the ticket price and definitely worth doing. Very well done.

Parliament of the state of Victoria
When Parliament is not in session, staff members provide a tour every hour on the half hour. It was a 45 minute tour of the main assembly room, the lower horse and the upper room. 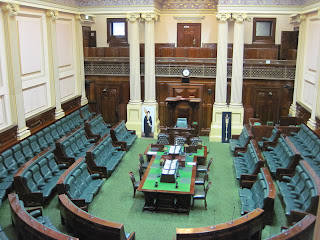 It was a great primer on English government and the history of the building.

Fitzroy Gardens and Cook's Cottage
These gardens are beautiful and worth a stroll. Cook's cottage is a 1700s cottage with a kitchen and main bedroom. You can enter the cottage for $5 per person. 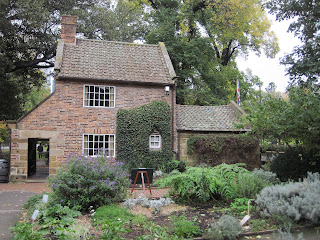 The back vegetable garden is impressive, but otherwise I don't think it's worth going inside. The furniture is not original and it's not the entire cottage as it originally existed. The real value is in the exterior which you can see without paying admission. 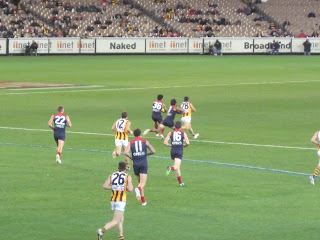 The big surprise was that both teams fight songs were set to American folk songs: Yankee Doodle Dandy and Grand Old Flag. The fans had scarves and jerseys. It was pretty cold (in the 40s) so I bought a hat to keep warm.

Tip: If your phone can access WiFi, I highly recommend caring it with you. Many museums have free WiFi where you can download the audio tour for free instead of paying for the headsets.

Other places that were recommended that I did not have a chance to visit are:
- Tour of Great Ocean Road
- Aboriginal Cultural Center
- Aquarium
- Public Art Tour - Melbourne is the home to many public art installations - both at the University and throughout the business district.

Email ThisBlogThis!Share to TwitterShare to FacebookShare to Pinterest
Labels: australia, melbourne, must see