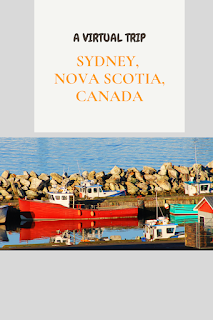 For our next port in our Canada and New England series we are going to head back to Nova Scotia and the port of call of Sydney on Cape Breton Island.

Founded by the British in 1785, it was incorporated into a city in 1904, however that was dissolved in 1995 and the area was amalgamated into a regional municipality. Sydney is the largest urban area on Cape Breton Island, and home to the island’s main port. It offers unique shops and services, historic sites and stunning scenery. Let’s take a look!
Did you know the world’s largest fiddle calls Sydney home?

Located in front of the Joan Harriss Cruise Pavilion on the waterfront, standing at 18 meters tall the fiddle is hard to miss. It stands in tribute to the folk music and traditions of the province’s Celtic community.
Built in 1787, Cossit House is one of the oldest buildings on the island. Through furniture, furnishings and costumed interpreters it celebrates the Gaelic culture and history of Nova Scotia. Hands-on activities like lace making, butter churning and weaving are also offered. For a peek at the home:

Just around the corner, visit St. Patrick’s Church, the oldest Roman Catholic Church on the island, today it is a museum. The goal of the museum is to represent the religious history of the area. Built between 1828 and 1830 the church features hand-hewn beams, Gothic windows, cut stone around the windows and doors, a tower with cupola and dominating door openings. To learn about the church:

To learn more about the history of Cape Breton visit The Sydney Museum  which was originally known as The Cape Breton Centre for Heritage & Science. The museum offers permanent and travelling collections of exhibitions that demonstrate the heritage, culture and science of the area. The museum also offers an area just for kids called Discovery Corner.
Visitors looking to bring back some local crafts from their trip should check out The Cape Breton Artisan Trail Map. Follow the trail to meet and learn about local artisans. There are painters, pottery designers, quilt makers, wood workers, jewelry makers, jam makers, chocolatiers, soap makers and more.
If you are a history buff in general or have an interest in history of the World War II era you will want to check out Fort Petrie Military Museum. The museum was originally one of seven fortifications located along Sydney Harbour to protect the harbor and convoys from military submarines during the Second World War. At that time Sydney was the home of the Royal Navy in the event of a German invasion of the British Isles. To learn more:

Just to the east of Sydney is The Cape Breton Miners’ Museum along the coast of Glace Bay. The museum is a tribute to the mining history of the region, and includes a tour of underground mines. Tours can be booked online, but you can also explore virtually:

Thirty minutes southeast from Sydney, is the town of Louisbourg and the world famous Fortress of Louisbourg. The French fortress was seized twice and helped create today’s Canada. Guided and self guided tours are available. There are also demonstrations in weaponry and puppet shows for kids. Learn more:

About an hour’s drive from Sydney is the town of Baddeck located at the beginning and end of the Cabot Trail. Here you will find the Alexander Graham Bell National Historic Site, the former home to the famous scientist and inventor of the telephone Alexander Graham Bell. Baddeck also offers many popular outdoor activities including golfing at Bell Bay Golf Club, sailing, kayaking, nature tours, and horseback riding at Rocking Horse Ranch. To see more of the area check out this video.
The Cabot Trail itself is a 185 mile loop around Cape Breton and considered one of the most scenic destinations in the world with its stunning views of the ocean, old-growth forests, prehistoric rock scarred by glaciers, and the mysterious Cape Breton Highlands. For the driver to have the easiest drive and to take in the views going in a clockwise direction makes the most sense. However counterclockwise is also good as the pullover spots are on the right side. To see some stunning footage of the area in the fall, click here.
We hope you are enjoying this virtual series of Canada and New England cruise port of calls!
Posted by Angie at 11:50 AM