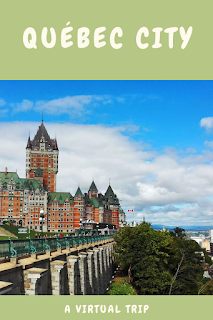 Continuing our look at ports of call found on Canada and New England itineraries we are next going to take a look at Québec City, Québec, Canada.

Québec City is one of the largest and most expensive cities in Canada, most of the residents speak French and only about 1.5 percent of the population speaks English. The city is known for the world-famous Château Frontenac, a château-style hotel in historic Old Québec, built by the Pacific Railroad Company in 1893. It was designated a National Historic Site in 1981. The city is also known for its European architecture and fortifications. The city is considered to be a piece of Europe in Canada. If you get a chance to visit this beautiful city make sure to try the local cuisine!

Today the Château Frontenac is managed by Fairmont Hotels and Resorts. The building has 18 floors, 611 guest rooms and has expanded on three occasions with the last major expansion in 1993. Check out this link for peak inside a Deluxe River-view King Room.

The Citadelle of Québec is the oldest military building in Canada. It is still an active military station today and also the secondary official residence of both the Canadian monarch and the Governor General of Canada. Originally it was constructed to secure the city against a potential American attack, with construction taking 30 years to complete beginning in 1820. In 1985 it was designated a World Heritage Site. For a short tour, click here and here to learn more about the site.

The oldest church in Canada is the Cathedral-Basilica of Notre- Dame de Québec. It was also the first church in Canada to be elevated to the rank of minor basilica, by Pope Pius IX in 1874. The original cathedral was first constructed in 1647, and it was twice destroyed by fire. The current structure was built after a fire in 1922. Four governors of New France and the bishops of Québec are buried in the crypt. Click here for a virtual tour.

Quartier Petit-Champlain is the oldest shopping district in North America and a great area to pick up souvenirs of your trip to Québec City. The area is located on the southeast edge of Old Québec. Make sure you save time to ride the funicular to the top to enjoy beautiful views of Old Québec. Check out this quick peak of the area.


For a look at the history of human society in Québec check out the Museum of Civilization. Through the use of interactive exhibits the museum draws a connection between the past and the present. Visitors enjoy the many specialized exhibits including life in the city through different generations and Québec’s culinary heritage. The museum offers virtual experiences of some of their exhibits online here.

Fans of colonial history will enjoy exploring Battlefields Park (Parc des Champs-de-Bataille), sometimes referred to as the Plains of Abraham, which is located just west of Old Québec. The Battle of Québec (the pivotal moment of the French and Indian War when the French were forced to cede Canada to Great Britain) took place here. For a short tour and information click here.


If you are visiting with children consider a trip to Aquarium du Québec. The aquarium has over 10,000 marine animals and two polar bears, Taiga and Eddy. Kids enjoy the water games in the outdoor area in the summer months, a Tree-to-Tree circuit, and kid special kid-friendly events through out the year. Check out this peak inside.


Another great spot for kids or adults that are still kids at heart is Les Galeries de la Capitale the largest amusement park in eastern Canada. This popular attraction has 18 rides, the largest indoor skating rink in Canada, and the first spokeless Ferris Wheel in Canada.

Located just a few minutes from Old Québec City is Montmorency Falls a large waterfall on the Montmorency River. The waterfall is 272 feet tall, a full 99 feet taller than Niagara Falls. During the summer months the falls give off a yellow glow due to the high iron content of the waterbed. There is a suspension bridge over the crest of the falls which provides access to both side of the park. Check out this quick look at the falls.

We hope you enjoyed your trip to Québec City! This virtual trip has me adding it to my own bucket list!