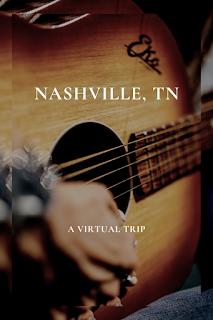 Founded in 1779, the city is named for Francis Nash, a general in the Continental Army during the American Revolutionary War. Situated on the Cumberland River, the city is a center for music, healthcare, publishing, banking, transportation industries, and also home to a number of colleges and universities. Let’s check it out!

A great way to explore this music city is the Hop On Hop Off Trolley Tour . There are 14 stops around the city offering access to more than 100 points of interest. One of the most popular stops is Broadway, the major thoroughfare through Nashville, and the Lower Broadway area is an entertainment district known for its honky tonks and live country music. For a great informational video on the Lower Broadway area, click here.

Music and history lovers will enjoy spending a few hours at the Country Music Hall of Fame and Museum located near Broadway. The museum has amassed one the world’s largest musical collections with more than 2.5 million priceless artifacts. The museum offers a video section on their website with pre-recorded live performances, interviews, songwriter sessions, podcasts and more. The museum’s digital archives with photos, recordings, objects and more can be found here. For a virtual tour of the museum itself, click here.

Once the home to the Grand Ole Opry is Ryman Auditorium. Tours are offered for a behind the scenes glimpse, but one of the best ways to experience the venue is to see a live concert. The auditorium continues to host contemporary artists like Trace Adkins, Blake Shelton, and Luke Combs. For a peak inside, click here.


The Johnny Cash Museum boasts the largest collection of memorabilia, including films, handwritten notes and letters penned by Cash himself. Exhibit highlights include his years in the Air Force, his marriage to June Carter, and his famous prison concert tour. To learn about the Johnny Cash and the museum click here.

Family-friendly, the Frist Art Museum is dedicated to presenting a changing schedule of exhibitions from local, regional, national, and international art sources. The museum has 30 interactive art-making stations, educational programs, and offers live music on Thursday and Friday evenings. The museum has its own YouTube channel where you can learn more about the museum itself and the exhibits.

Centennial Park, located in Nashville’s West End Neighborhood, once served as a fairground, a racetrack and the location for the 1897 Tennessee Centennial and International Exposition.  Today in the summertime visitors to the park will find Shakespeare in the Park, craft fairs, and local festivals. Park amenities include a one mile walking trail, a sportsplex, lake, historical monuments, sunken garden, volleyball courts, and a dog park. The centerpiece of the park is a replica of the Parthenon. The original is located in Athens, Greece. This Parthenon facility in Centennial Park also serves as Nashville’s art museum.

Music Valley is home to the Grand Ole Opry, a weekly American country music stage concert. It was founded in 1925 as a one-hour radio barn dance on WSM, it is the longest-running radio broadcast in US History. Guided backstage tours are available of the theater. Check out this tour and brief history of Grand Ole Opry. Music Valley is also home to a slew of restaurants, bars, entertainment venues, shopping and the Gaylord Opryland Resort and Convention Center. Check out this video tour of the area.

Just northeast of Nashville, is The Hermitage the home of our 7th U.S. President, Andrew Jackson from 1804 until his death in 1845. The current home was actually built between 1819 and 1821, and in 1831 the home went under a major remodel with the addition of 1st floor wings added to the east and west side of the home and a two-story portico. A fire in 1834 heavily damaged the home, it was remodeled again and completed in 1837. The Hermitage has its own YouTube channel where you can learn more about Andrew Jackson and his home.

For a wonderful overview of the city, check out Expedia’s Nashville Travel Guide. There are also a lot of great little towns within two hours of Nashville to explore if you are looking for some more Tennessee history and culture. Check this link to see if any of these are of interest. My vote would be a day trip to Pulaski to tour the home of Frank Mars, founder of Mars candy, followed by a stop at Big Creek Winery. What would be your pick?