For 2016, large parts of Hollywood Studios are under construction as Toy Story Land and additional Star Wars Attractions are added. 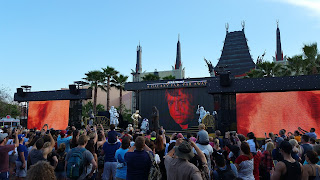 Quick Service Meal for Two: Fairfax Fare has some good barbecue platters. It is across from the Beauty and the Beast show.

Single Rider Line: Rock ‘n’ Roller Coaster has a single rider line that is sometimes open. It is located by the Fast Pass entrance.

Characters: Three key areas are the Toy Story Character area across from the Toy Story Mania ride, Launch Bay,  and the area around the Disney Junior Live On Stage Show. The Toy Story Character Area is a nice air-conditioned way to wait inside to see Woody and Buzz Lightyear. The Area around Disney Junior Live on Stage has characters standing outside. Launch Bay has two Star Wars Characters. As of 2016, Launch Bay also hosts a special character meet and greet for Disney Visa Cardholders. Be sure to visit the Disney Visa Meet and Greet first to see which character is there.

Air Conditioning (Nap) Breaks: The Great Movie Ride is a nice longer Air Conditioned ride – napping would be a little hard. The Frozen Sing Along Celebration provides a great air conditioned environment. It is very loud so you may want to consider bringing ear phones for the little ones.

Be Sure to Check Out:


If you have kids between the ages 4 - 12 who love Star Wars, take them to sign up for the Jedi Training Academy. It's a 20 minute show where they can train as Jedi knights in front of an audience.  Indiana Jones Adventure Outpost located between the Indiana Jones Epic Stunt Spectacular! and the 50's Prime Time Café. Registration begins when Disney's Hollywood Studios opens for the day.

If you'd like a copy of my tips for all four Parks in one free PDF -
Click here to request it.