"April 2013 marked the first trip alone with my husband of 2 ½ years. Knowing that we didn’t have the time to plan a full trip by ourselves, we contacted Trips by Angie. It was such a relief to turn the details over to someone else!

Angie asked great questions about what types of places and things we enjoyed doing and used that information to put together a package that met both of our needs. My husband is a “surf, sand and sun” kind of guy and the Hilton Pensacola Beach Gulf Front hotel was perfect. 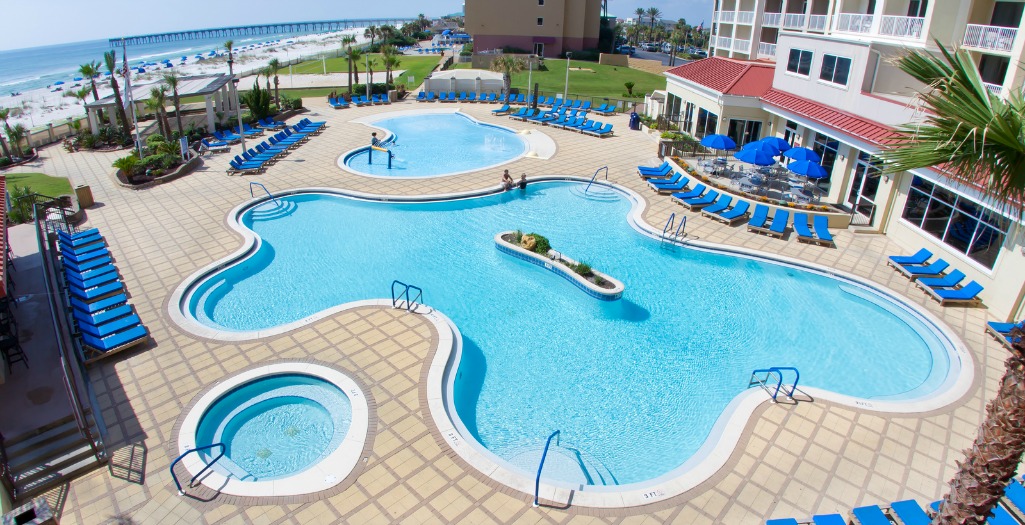 It was comfortable, clean and close to the ocean. There was shade around the pool for me (sun and surf usually means I spend quality time with my good friends, Aloe and Vera).

We enjoyed walking the boardwalk and found a great wine and cheese shop. Our favorite dinner was at Hemingway’s-Bimini Beach Bar—reasonably priced and fabulous food! Pensacola also has a 360* wheel that allowed us to get an overview of the town. With the Naval Air Station nearby, we were able to watch the Blue Angels practice (all practices are free). There is also a National Naval Aviation Museum on the base and several forts in the area. Fort Barrancas was closest to the airfield and we visited this one.  It was in excellent shape, having received far less shelling than Fort Pickens (a one-time rival) across Pensacola Bay.

Following Pensacola, we travelled to New Orleans, LA, and Hotel Le Marais in the French Quarter. 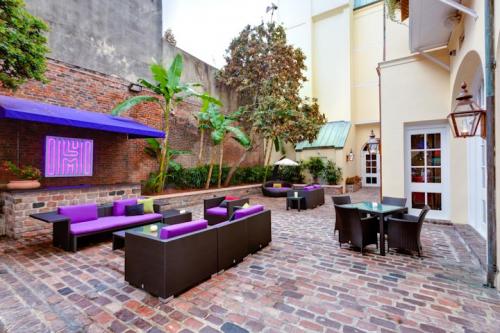 The hotel is located between Bourbon and Royal—the two main streets. It was close enough to easily walk yet removed enough to still be quiet. The hotel was beyond fabulous! I can’t thank Angie enough for choosing a place like this—it was first-class all the way with great service, rooms and drinks. The concierge was key in helping us to book several of our tours.

Our first tour was the VIP City Tours by bus; it worked out quite well as it was raining that day. We were able to see areas affected by Hurricane Katrina and the lower 9th ward. Water marks will still visible on many out-buildings and street signs. We drove along Lake Ponchatrain, saw areas where “Interview With A Vampire” was filmed, St Louis Cathedral and the Garden District. The tour guide was knowledgeable and shared quite a bit of history. He was local to the area which added another depth to the tour since he was familiar with the city both as a guide and a resident.

Walking tours were next on our list and we chose the Haunted History Tours, French Quarter Vampire Tour. Meeting in front of the St. Louis Cathedral in Jackson square, we had time to walk inside and view this beautiful Cathedral. We were lucky enough to be there at a time when someone was practicing on the pipe organ. The walking tour took us closer to many of the places used in films, past the home of Angelina Jolie and Brad Pit and the convent. Again, our tour guide was local to the area and able to give us much history and tips on great restaurants (Irene’s is a must!).

Walking along Bourbon Street was always entertaining—no shortage of interesting people or sights to gawk at, live jazz music was never hard to find, my husband received “lessons” in how to eat a craw-fish from the waiters and we walked along the shores of the Mighty Mississippi. Our last stop before leaving Louisiana was an airboat swamp tour. Usually early April is the best time to go as the alligators are mating; this year it was colder than usual and they were still hibernating. Captain Ernie was experienced in his job and educated us on the habits of alligators and de-bunked the show “Swamp People.” In spite of the cold, he was still able to locate a half-dozen ‘gators for us.

On our way back home, we stopped in Loretto, KY to visit the Maker’s Mark Distillery. My husband is a member, which means there was a barrel of whisky with his name on it and after 8 years, it was ready. We received a tour of the grounds and watched the distilling process before going to a tasting room to try 3 of their different brands. Following this, he received his two bottles of whisky, placed the individualized labels on the bottles and was able to dip them into the trade-mark red wax that coats the neck of each bottle. You don’t have to be a Maker’s Mark ambassador to do this (although it’s free to sign up and they send annual gifts)—anyone can tour the distillery and purchase a bottle to dip—it just won’t include your own personalized bottle.

This was our first time using a travel agent and I highly recommend Trips By Angie. Left on my own, I never would have chosen such high-end, excellent hotels and the stress of trying to plan out where to stay would have taken away from the entire purpose of a relaxing, adult-only vacation. Angie took care of searching out areas that catered to both of our interests. It was a one of the best trips we’ve ever taken and we definitely plan on using Angie’s services as a travel agent again!"
Posted by Angie at 5:00 AM