Last year, my husband Glenn and I spent two different weekends in New York City. Here's the first weekend's review and next weekend I will post the second weekend. Hope you enjoy!

To capitalize on a work trip that took me to New York in June,  Glenn arranged to fly up and meet me Friday night. The goal was to eat our way through the Chopped judges’ establishments and check out a Mets game. Since Glenn’s flight wasn’t due to arrive until late, I headed over to TKTS in Times Square after to work in investigate what Broadway shows were on sale. After consulting many pamphlets, I decided on Memphis. It had won numerous Tony awards and centered on the early introduction of Blues in the South. I was sold. After getting the 40% off ticket, I headed across the street to the sushi bar at the W hotel. I have been to Times Square a few times and always wanted to stop in for a cocktail so I did.  I grabbed a table at the window and ordered a smokey bourbon cocktail. The people watching was fantastic – the cocktail was not. I decided to wander over to the theater to find a place to eat nearby. I ended up at Sardini’s – an old school pre-theater restaurant with an old school menu. I grabbed my leather booth under the cartoon portrait of celebrities from another era. 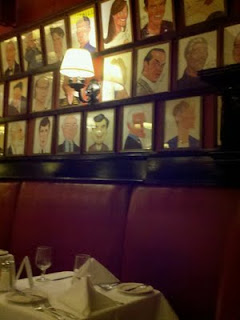 I ordered the pre fixe menu entirely on the recommendation of the waitress. She was tickled that I just ordered everything she said and I had a good meal.  After dinner, I had about an hour and a half to dinner, I didn’t feel like going to another bar so I ended up just hanging out outside the theater monitoring Glenn’s flight situation. Yep, his flight was delayed, delayed and then ultimately cancelled.  A HUGE BUMMER! He booked himself on a flight Saturday morning and headed home.  I headed into Memphis. 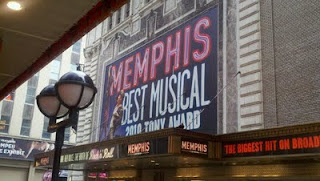 Memphis was spectacular! The music and story line were terrific. I really really enjoyed myself. I decided to walk back to our hotel – the Hotel indigo in Chelsea and enjoyed the nice New York night. The hotel was very nice – a great location equidistant between several subway lines. The front desk was very helpful in getting me toothbrush, toothpaste, comb, etc.  since Glenn had all our luggage.
The next morning, I headed out to Prune – Gabrielle Hamilton was recently named the Best Chef in New York City by the James Beard Foundation  and I wanted to try out her brunch. I left pretty early and walked. I ended up in a street market. I bought a great scone and slice of Irish Soda Bread to keep the food emergency at bay. I hit Prune at the perfect time – early enough to secure a spot when they first opened, but late enough that I wasn’t waiting very long. I sat at the bar and ordered the spicy chick peas and eggs. 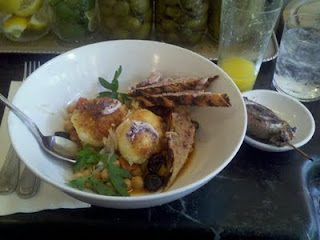 The egg was amazing – it was a perfectly poached egg that had somehow been breaded. The chickpeas were spicy, but the dish could have used a little more crunch – after the crostini was gone, the texture was a little monotonous.
After breakfast, I decided to hop on the subway up to the Met to check out the Alexander McQueen exhibit. I have to admit the only reason I knew about it was because Neil Patrick Harris had tweeted about it the week before. 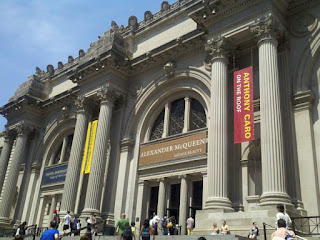 I am so glad I went. The exhibit was unbelievable. It perfectly captured McQueen as a designer and honored the art in his clothes. I spent another hour wandering the Impressionist artists and wondering about the modern art. Really? An entire canvas in black is art? I was more than a little lost. I decided to grab a snack in the museum’s café. 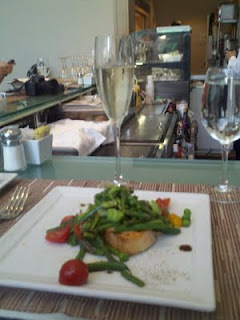 A glass of Prosecco and some spring vegetable bruschetta  - both were very good. After the Met, I headed outside to walk up to the Guggenheim. I just had to stop at the ice cream food truck that was squarely in my path. 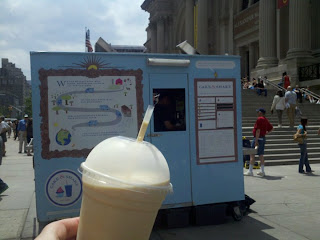 I had the best salted caramel shake. The Guggenheim was in the process of opening a new exhibition so most of the galleries were closed. I was overwhelmed in the Dollar room – a giant room wall papered in dollar bills.


After the Guggenheim, I headed back to the hotel to meet Glenn. I decided to take the bus. My first bus ride in New York. It was great. I loved watching all the people as we inched our way down fifth avenue. Glenn finally arrived and we got ready to head out to our 5:30 pm reservation at Butter – Alex Guidecelli’s restaurant.  We were a little early for the reservation so we headed around the corner to a local pub. It has a great beer selection. We had a couple beers and then went to Butter. Because we were sure we were not going to get the tasting menu with wine – we ordered a couple cocktails and perused the menu. The décor at Butter is very cool It simulates a wood cabin with a huge wall of birch trees at one end backlit. 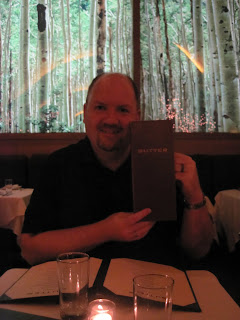 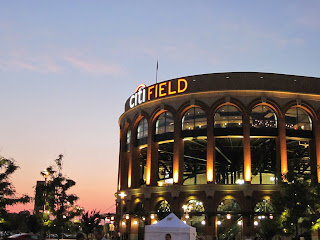 Nothing like showing up in the 6th inning in the family section after drinking our way through the East Village. I may have sat down, groaned, and immediately put on my sunglasses lamenting that the lights at Citifield were “too bright”. We stumbled back to our hotel and called it a night.
Sunday we headed out to our 1030 reservation at The National – a Jeffrey Zakarian joint. I had the dish of the day with the pork belly benedict. 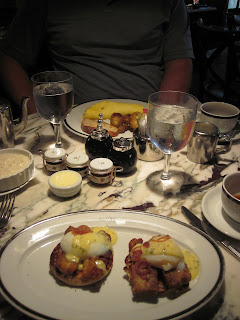 It was fantastic. One of the best brunch dishes I have ever had. After brunch, we wandered around the street market until we found the perfect onesie for our niece. We headed up to Central Park to enjoy the beautiful weather. We sat on the rocks and then headed to the softball fields. We had a great time watching men who we could only assume had been playing ball together for 40 years talk trash and occasionally hit a softball. Next Stop was Rosie O’Grady’s for some snacks and a couple beers. Then we set out to find Heartland Brewery which earned a prize – the worst beer we have ever tasted. Not a single one was good.

After Heartland, we walked down to Chelsea - the site of our 530 pm dinner reservation at Scarpetta – a Scott Conant restaurant. We grabbed a table, listened to some folks play the communal piano and monitored the line at the massive Apple store. Then it was time for our reservation. The inside was very nice – the back area was bright and comfortable. 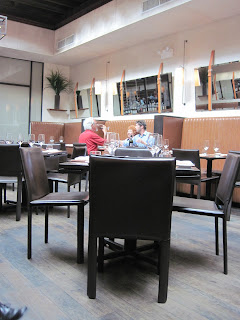 Glenn ordered the spaghetti and the sea bass. I ordered the short ribs and a special carbonara with truffle foam and spring vegetables. I won the ordering contest for sure. Both my dishes were fantastic. 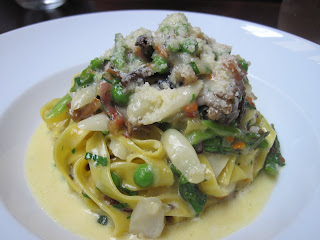 The pasta was incredible – the mix of flavors was so good. Glenn was underwhelmed by the spaghetti and found the fish to be good, but again missing the wow factor. We paid our check and headed to the airport in time to catch our Jetblue flight home.  Overall a great weekend in New York City – stay posted for Part 2 next Wednesday.
Posted by Angie at 7:00 AM